Living with Coco Chanel: The Homes and Landscapes that Shaped the Designer 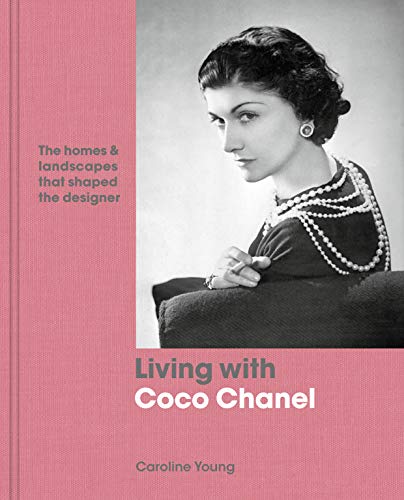 Coco Chanel was born in 1883 or thereabouts since she never really divulged her age, and she died in 1971. For more than half of a century books have been written about her and her rise to “stardom” from her humble roots—though no one is quite sure exactly what those were.

What is so compelling and engaging about Living with Coco Chanel is the angle at which Young comes at the subject to find her own unique way of telling the designer’s life story, warts and all. At first it may seem that Caroline Young was going to try and debunk all the Chanel myths of her growing up and finally set the record straight, but further into the story, the more Young delves deeper than just the surface history and usual background that so many others have regurgitated.

The title might be a bit misleading, but the story of Chanel unfolds with telling facts about Chanel’s preoccupations with colors, interior design, comfort, and her great desire to stand out from the flock of her contemporaries and to be noticed. Interestingly, Ms. Young  seems to  not just list the usual string of paramours and liaisons that became part of the Chanel legend but also how each or so many of them held sway over her in terms of their influences and the effects that each had on her psyche and her creative scope when it came to her life and her oeuvre.

Among the lesser known traits or predispositions that “mademoiselle” possessed was her philanthropy and generosity that she bestowed especially to those in the arts, whether it be music, dance, or actual artists. Young tells us of Chanel’s fondness for Russian émigrés as well as some of her countrymen who were in need of financial assistance as well as her personal involvement to further their endeavors.

Even the most jaded and well-read reader for all things Chanel will find many morsels of information that have been hitherto unwritten about in any of the monographs that that have dealt with the life and times of Gabrielle Coco Chanel, including the origins of her nickname, Coco.