Livewired: The Inside Story of the Ever-Changing Brain 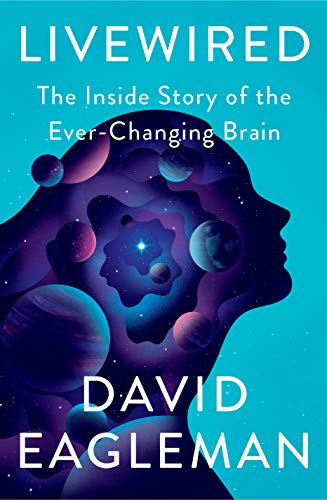 “Livewired is a challenging and enlightening description of one of the greatest mysteries of our time: the brain and how it functions.”

What do epilepsy and a missing portion of the brain have in common? In the opening chapter of Livewired we learn about one young child who had a form of encephalitis that produced brain seizures which became progressively more frequent and more severe. The only treatment: removal of half of the brain. Within months after the surgery, he was again developmentally appropriate, showing only some difficulty in the use of his right hand. Later in the book we read of a girl who was born with only half a brain and yet developed normally, both physically and intellectually. These and stories from other individuals serve the basis of the narrative.

Dr. David Eagleman has an eclectic background. In addition to his work on brain plasticity as an adjunct professor at Stanford University, he created and hosted the well-known PBS television series The Brain and has been extensively involved as a writer of both fiction and nonfiction. Eaglman has founded two companies involved with neuroscience research and development, and has served as a scientific advisor to a number of professional organizations. He terms himself “a storyteller” and this skill is seen throughout the pages of Livewired.

The story begins by debunking our basic concept of the brain. Instead of being a tissue with carefully defined regions and functions that are reasonably static throughout life, the reader is given a picture of a dynamic organism that undergoes constant alteration in response to environmental and situational demands. The picture is drawn of neurons constantly shifting, growing or retreating, while forming and reforming new connections and disconnecting from old connections that are no longer needed.

The two patients described above are used to develop this thesis. The girl born with only half a brain had neurological realignment taking place from day one. The boy whose brain was surgically altered eventually gained good function, but some neural pathways had already been laid down after birth, so realignment and reorganization were required.

This idea of dynamic reorganization and restructuring is developed in subsequent chapters as different situations are explored:

Livewired is both fascinating and frustrating. The fascination comes in the intricate interweaving of observations and clinical histories that form the framework of the author’s concepts. The frustration comes from “data nerds” (such as this reviewer) who would like to see more of the specific tracing of networks and development of neural pathways alluded to in the text. But that would probably take away from the storytelling that the author does so well.

The book is extensively annotated, with numerous helpful notes and further explanations keyed to each chapter. There is also a very useful list of materials for further reading at the end of the book.

Livewired is a challenging and enlightening description of one of the greatest mysteries of our time: the brain and how it functions. The story laid out in this book will provide many hours of interesting conversation and should open doors to myriad future research projects.