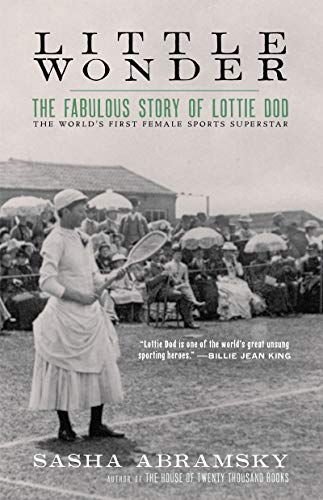 “Abramsky offers a fascinating portrait of the life of this forgotten sports heroine in fluid prose.”

In the 19th century, women were relegated to a subordinate position in society. Few women worked outside of the home. Women were expected to marry and have children. Even in thriving democracies, women could not vote. The law said that a husband and wife were one person, and that person was the husband.

Lottie Dod was the exception to this rule, as Sasha Abramsky proves in Little Wonder, an adroitly written biography. Dod was a remarkable athlete in a variety of national sports in England. She did not marry or bear children. As she mastered one sport and beat all comers, she shifted to another and swiftly became a champion.

Dod began her sporting career at the age of 15, winning the Wimbledon women’s tennis title in 1887. It was remarkable that the young girl could even move around the court wearing the heavy clothing required during the late Victorian era. After winning five singles titles and various challenge matches against men who had also won Wimbledon championships, she moved on to achieve other conquests. The variety of her endeavors was quite remarkable. She was the British national golf champion, and a member of the English women’s national field hockey team. She qualified as a premier ice skater and tobogganist, and she won a silver medal at the 1908 London Olympics in archery.

In the history of sport, the “Little Wonder”—Lottie’s nickname in the British press—has had only one possible peer. The great American athlete Babe Didrikson Zaharias excelled throughout the 1940s and 1950s in golf, basketball, baseball, and track and field. She also was an expert diver, roller-skater, and bowler. No male athlete has come close to matching these two extraordinary women.

Sasha Abramsky’s best work addressed Dod’s Swiss adventures in mountain climbing. Unlike her other sports, mountaineering only pitted the Little Wonder against herself. The Alps proved to be a rugged foe, but, once again, Lottie Dod prevailed. Ultimately, Dod’s sciatic condition forced her retirement from competitive sports, but it did not deter her from volunteering as a nurse in the Great War.

Sasha Abramsky, a freelance journalist, was born in England and, in addition to his nine books, he has written numerous pieces for major newspapers and magazines. A progressive voice on issues arising out of the maldistribution of wealth, Little Wonder is Abramsky’s first book-length effort in the field of sports history. Readers will hope it is not his last. Abramsky offers a fascinating portrait of the life of this forgotten sports heroine in fluid prose. Little Wonder is a worthy addition to the sports literature.