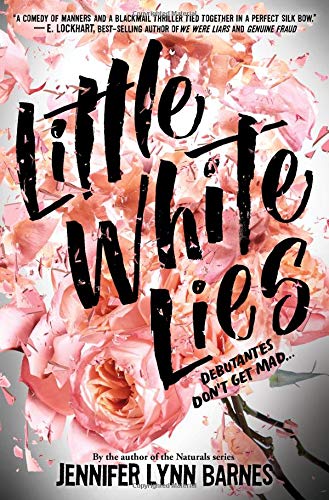 Jennifer Lynn Barnes knows the ins and outs of “the season” for social activities, and she blows it up in Little White Lies.

Sawyer Tate, an 18-year-old young woman has settled her life into being an auto mechanic. She lives with her mother—there is no father in the scene and never has been, and although Sawyer is curious, she is good with that understanding.

Her life is moving along at a snail’s pace when one day Lillian, her wealthy grandmother, shows up at the door and offers a proposal it is hard to reject: a half million dollars if Sawyer will come to Lillian’s home for “the season” and participates in the many activities.

Sawyer’s mother, Ellie, was kicked out of the house when she became pregnant with Sawyer 18 years ago; she is a carefree woman who falls in and out of love with each sunrise, and she knows that Sawyer is the “take control” member of the family. Right now, Sawyer is in and Ellie is out and about with a new boyfriend.

So, with Lillian’s offer, Sawyer sees an opportunity to learn more about who her father was, or is, and she agrees to join the other debutantes for the season.

Here is where Barnes starts to develop a cast of characters all cut from the same cloth, but each as totally different as they can be. Sawyer meets her cousin, Lilly, the daughter of Ellie’s sister Olivia and her husband John David. Lilly’s friend, Sadie-Grace is the beautiful deb, who can’t seem to stem her nervousness, and appears somewhat ill at ease in her deb role . . . or maybe not so much! In spite of Sawyer’s life history on the other side of the tracks, the girls grow close.

Enter Campbell Ames—the fly in the ointment. Spoiled, selfish, and not above blackmailing Lily for some social media indiscretions, Campbell has her own goals and will do whatever is necessary to accomplish them.

Now, having set the scene, Barnes does an interesting thing with her story. While told in the first person from Sawyer’s point of view from several months earlier, Barnes sprinkles several short chapters in the third person throughout the story, current day where we find the four girls sitting in the local town jail cell and a befuddled newly confirmed sergeant has no idea what to do with these girls or why they are even in the cell.

The story moves back and forth from jail to the events of the season while Sawyer searches for her father among the ranks of the wealthy men, and Campbell moves forward with her own plans to frame her father for his many transgressions.

And the parents have their own sets of issues. The mothers squabble and vie for first place among the “set” while never doing anything that could be construed as second class. The fathers are the money and power men, and any one of the men introduced could be Sawyer’s father.

Barnes has taken what could have been a convoluted storyline and ironed out all the wrinkles—Sawyer’s hunt for a father, Campbell’s goal to put her father in jail and destroy his life. The story absolutely makes sense and as each chapter draws both Sawyer and Campbell closer to achieving their goals, the events become more raucous.

Barnes is very good at laying out the clues for the reader to figure out who Sawyer’s father was . . . is . . . could be, but she is also skilled at keeping the truth until the very end of the story.

Little White Lies is a story of discovery, and it is packed with laugh-out-loud scenes and language and characters. If there is someone on your gift list who wants to be a debutante she needs to read this book for insight into what goes on behind the scenes. It might not change her mind, but it sure will be an entertaining and informative read!