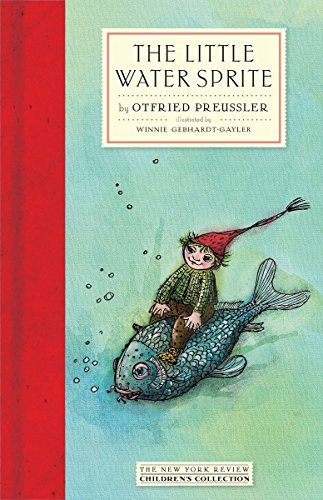 The Little Water Sprite was first published in 1956. By today’s standards, precious little happens in this coming of age tale about a young, curious water sprite. While Preussler was a beloved and revered children’s author, twice awarded the German Children’s Book Prize, this book will likely have little appeal for today’s young reader.

It may also have little appeal for the parents of today’s young reader. Our little water sprite has a well-developed sense of adventure but lacks all common sense. While his escapades end well—in that very little bodily harm comes to either the sprite or the victims of his pranks—parents will find some of his choices objectionable.

In one scene the sprite steals the local miller’s boat and attempts to row it (without paddles) across the pond. The miller spies his boat adrift with a small lad aboard and calls him back to shore. When the sprite realizes he’s been spotted, he jumps into the water, leaving the hapless miller to assume a young boy has drowned. He summons the villagers, and they search the pond. The little sprite, not the least repentant, finds this vastly amusing.

In another scene the young sprite discovers that riding the miller’s water wheel is great fun. But what would be even more fun, he decides, would be to the ride with the water running very fast. So he opens the dam—and nearly drains the pond. His parents are understandably vexed, as their house is at the bottom of the pond. In this one instance, the little sprite gets his what for. It doesn’t quell his appetite for mischief for long.

The accompanying line illustrations are quite charming, and Preussler invents some clever details that readers of all ages will enjoy. The well stocked sprite pantry, for instance, contains duckweed soup, preserved watercress, stewed frog spawn, and pickled water fleas. And in one endearing episode, the guileless sprite meets three human boys and learns an important lesson about matches.

But the modern reader will likely expect more than Preussler delivers. The scene in which gypsies camp in their caravan near the pond cries out for a kidnapping or at least a road trip for the little sprite. The gypsies move on without incident. In another the sprite finds himself being hoisted out of the pond at the end of a fishing pole. What adventures and trouble this could create! The sprite returns unharmed, never learning what consequences this risky behavior could cause.

The water sprite suffers few consequences from any of his antics.

The sprite has one friend in the pond, an old carp, to whom the sprite is generally kind and thoughtful. But he’s rather insolent to his parents and downright mean to the miller and others, including one unassuming passerby, whom the sprite tricks into running straight into the pond. Not terrific modeling for young children.

The Little Water Sprite lacks the charm, cadence, and vigor of Preussler’s Little Witch and might work best as a book to read aloud to very young children—with an accompanying discussion of ethics.