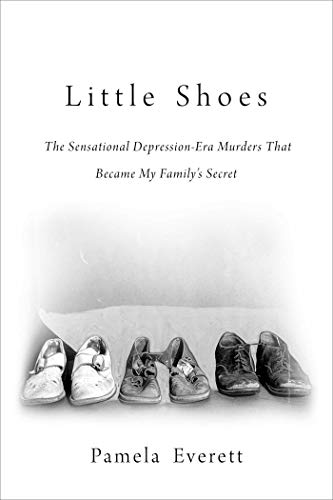 In Little Shoes, author Pamela Everett has chronicled the events of a 1937 California murder of three little girls with lawyerly skill.

Most interesting is that this is her family’s story—something she discovered by accident when, as a teenager, her father caught her in a lie and the story about the murder of his two sisters and their friend unfolded—a story of which she had no previous knowledge.

The three girls, Melba Marie and Madeline Everett and Jeanette Stephens, all under ten years of age, were kidnapped, abused, and murdered. The girls were playing in a park near their homes when they suddenly disappeared. When they did not appear at home as expected, the parents, did not at first suspect anything was wrong. But as time moved on and the girls still did not appear, the hunt was on.

Through the use of short but detailed chapters, Everett systematically describes the events that started in June of 1937 and followed through the execution of the guilty party in September of 1938. The biggest question raised in her story is: Was he guilty?

Everett, once a broadcast journalist, now a lawyer who volunteers with the California Innocence Project, is trained to look for inequalities in stories and ask questions to answer those inequalities.

That being said, she makes an interesting case for wrongful prosecution: “But here I was finding textbook issues in a decades-old story, and like so many of these cases, I was also finding damning evidence. And that’s what’s so perilous about criminal investigation and prosecutions. . . . the evidence can seem overwhelming or conclusive on the front end because we’re looking at it in ways that supports our—sometimes desperately held—views that we have the right man.”

When the bodies of the girls are found, the rising demand for justice put ever-growing pressure on the authorities to find the man responsible and put him to death. When several possible suspects are identified, each is quickly released and the pressure mounts further.

Eyewitnesses came forth with a variety of stories, in many cases unreliable. As the police continued their search, they found a likely suspect in Albert Dyer, a local WPA crossing guard who was at the park at the same time as the girls. Police did not look much further, and Dyer was quickly taken into custody.

It is here where Everett puts the police tactics under scrutiny. Several times Dyer confessed, but the question arises: Were these confessions given freely or under duress? Several times he recanted the confessions, but to no avail.

Based on eyewitness accounts, Dyer, a man with the intelligence of a ten-year-old, could not have been the guilty party, and other names continued to surface. Everett lays out the information that clearly points to another party, Fred Godsey, but the police dismiss him as a suspect since they had their criminal in custody and were not about to start over. “The investigation into other suspects was over. Albert Dyer was the killer.”

The story, from beginning to end, is fascinating and holds one’s interest throughout, but she leaves the reader with several disquieting unanswered questions about how the state’s attorneys handled the court case—questions about evidence not presented at trial; witnesses not called to testify; jurors who may have had questions unanswered in the courtroom. One is left looking at the way the law worked in 1937, and what changes have occurred since.

Everett does a good job of getting into the minds of the people involved, especially Albert Dyer. The reader experiences the frustrations of the defense lawyers as they beg for additional time to prepare their case for trial and again for appeal; the anguish of the parents; the frustration of the citizens who did not believe Dyer was guilty but got no help from authorities. Once the deed was done, the trial was over, the appeals rejected; there was no reopening the case—no hearing the pleas of the citizens.

Everett’s writing is clear, her style is easy to read. It’s hard to put the book down. Everett’s case is made and the reader hopes, right to the last chapter that some saving grace will barrel through the prison and save Albert Dyer. But that was not to be.

The errors are always disturbing, caused by the same issues in Dyer’s case: problematic eyewitness identifications, questionable confessions, faulty—or no—physical evidence, and a district attorney’s office zealous to win justice for innocent victims. The logistics in these cases are challenging enough, but introduce the possibility of human error inherent in our jury system . . . and we have the recipe for these too-frequent miscarriages of justice—and the reason to continue questioning convictions like Dyer’s.

“Fortunately, through years of tireless work by the Innocence Project . . . reforms in law enforcement and scientific practices are reducing risks on the front end of the criminal justice process and lawyer and judges are using evolving procedural laws to keep many of the errors in check at trial.”

Little Shoes is disturbing in many ways, but Everett lays out the facts clearly and concisely. Everyone interested in fairness for all involved in such events should read this book.