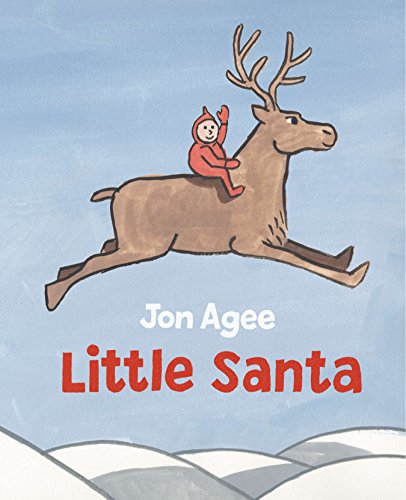 “. . . as pleasing as the book is visually and as winning as the concept may be, the story leaves something to be desired.”

Jon Agee is a treasure whose books are consistently recognized with awards and honors. Yet he has never quite achieved the level of public recognition he deserves.

Since 1982, he has been producing gems like The Incredible Paintings of Felix Clousseau, Dmitri the Astronaut, and (perhaps his best) Milo’s Hat Trick. His style—large full-color figures from creative perspectives in often generous white space—is instantly recognizable, and it never fails to imbue his scenes and characters with a charm that somehow transcends simple cartoons

Mr. Agee’s latest, Little Santa, is the tale of Santa’s childhood. It’s essentially a superhero origin story, and the concept alone should guarantee the book’s success (after all, Santa Claus may be the most popular superhero of all time).

The book is a delight to look at. Little Santa is a cute little pudge in a bright red pointy-hooded pajama suit. His colorfulness reinforces the fact that his attitude about the challenges of life at the North Pole is better than his more drably hued, Amishly serious-looking parents’ and siblings’.

Mr. Agee’s creative use of white space is particularly well employed here to depict the snowy landscape and the blizzard that swamps the Clauses’ house one night. The snowbound family sends brave Little Santa to get help, which he finds in the form of a flying reindeer and a troop of industrious elves.

Unfortunately, as pleasing as the book is visually and as winning as the concept may be, the story leaves something to be desired. The best superhero origins satisfy by revealing childhood incidents that perfectly explain the full-grown hero’s quirks, strategies, and styles. Mr. Agee misses golden opportunities here. Santa is nothing if not quirky. The reader wants to know why he prefers chimneys to windows or doors—but here we learn only that he simply liked them. Similarly, the hero’s costume: the red pj’s are adorable, but Little Santa is wearing them from the start.

While these are disappointments, the ending is actually a bit disturbing. After being excavated from their buried abode, a much easier year follows with the elves around to help. Even so, the Clauses decide to move to Florida. They wave goodbye while Little Santa’s frowning mom tightens his scarf. We’re told he simply “stayed behind.”

The book ends with an illustration of the grownup Santa we all know and love on a roof with his team of reindeer. The accompanying text reads, “And you know the rest of the story.”

Be that as it may, I suspect Little Santa’s abandonment will leave many young readers with questions about their hero’s backstory that may undermine the playful spirit of the book.