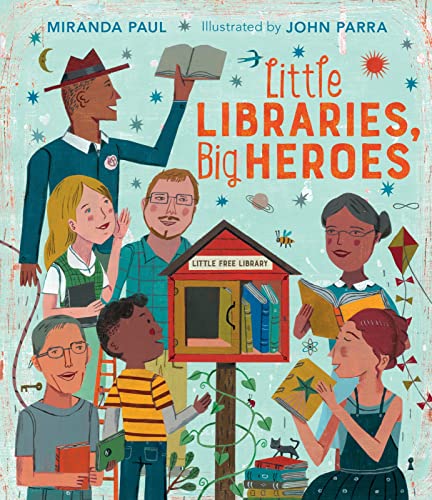 “Miranda Paul reveals in Todd Bol’s story what it means to be an ordinary hero and how an idea that starts from the heart can inspire others to do the same.”

It started with one person. Then lots of friends and helpers joined in. Now they are in more than 90 countries throughout the world. Over 90,000 of them, containing millions of books. Little Libraries, Big Heroes by Miranda Paul is the powerful story of the Little Free Library (LFL) movement and its unforeseen impact across the globe.

Paul’s writing is playful and engaging. The story begins with an introduction to Todd Bol and his inspiration for starting the first LFL: his mother’s death. Todd turned his grief for her into an act of sharing. She taught kids to read—so he built a one-room schoolhouse little library, filled it with books and placed it on his lawn for passers-by to borrow books as they please. She also left Todd with a powerful message: “She told him he was gifted and had something big to offer the world.”

Since reading was difficult for Todd as a child, creating a community of readers and a system where books are exchanged was probably not something he ever imagined doing. An ordinary man started something extraordinary. Through his efforts he showed that one person can make a difference in the world in their own way. A kind of hero.

Launching this movement was definitely not easy. Todd’s friend Rick Brooks helped him from the beginning, along with others. Without much money, they built many little libraries out of scrap wood—but very few people bought them. And at first no one really seemed to notice them. That’s when they decided to bring little libraries to people instead of waiting for people to come to them. “Out they went with thirty tiny libraries, planting them like seeds between Madison, Chicago, and Minneapolis.”

Soon thereafter “the seeds of Todd and Rick’s idea were beginning to grow.” LFLs began to spring up everywhere. “The whole country seemed to be buzzing about the tiny, anything-but-ordinary libraries.” They also became places where people gathered to make friends, share their love of books, and to dream. They inspired creativity, and people began making LFLs out of old television sets, telephone booths, Lego bricks, and even blocks of ice! Ordinary citizens became “stewards” of the tiny libraries, including kids, who cared for them and became “community heroes” themselves.

John Parra’s illustrations are exquisite and dimensional. They are lively, warm, and capture the energy and spirit of sharing and making the ordinary extraordinary. He brings to life the highly visible places where one can find a LFL like yards and sidewalks, but also unexpected places like prisons, hospitals, and hiking trials. Poignantly, Parra shows their powerful impact following Hurricane Katrina, at the US-Mexico border, and throughout the world.

In Little Libraries, Big Heroes Paul beautifully and expertly shows how a culture of reading has sprung from this “Take a Book, Share a Book” movement. “Today, books will be loved. Big ideas will spark.” Moreover, Miranda Paul reveals in Todd Bol’s story what it means to be an ordinary hero and how an idea that starts from the heart can inspire others to do the same. Todd’s mother was right. He did have something big to offer the world. Sadly, Todd died of pancreatic cancer just prior to the release of this book. Though his legacy will continue to encourage readers, the love of books, and having a powerful impact—anywhere and everywhere.