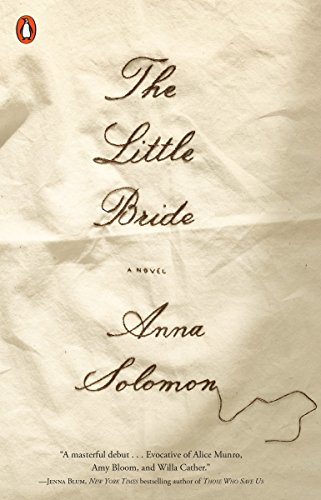 “. . . a plot-driven novel conveyed in crisp, descriptive, and thought-provoking prose via an engagingly intelligent third-person narrator. . . . an auspicious debut.”

It’s easy for 21st century upper middle class Americans to forget how poverty, the threat of violence, and rigid gender roles can limit a person’s life choices and opportunities—and how these restrictions would make Minna Losk, a 16-year-old Jewish girl in late 19th century Odessa and the protagonist of Anna Solomon’s well crafted debut novel, choose to become a mail-order bride. Minna’s lack of agency is a theme through most of the book, a plot-driven novel conveyed in crisp, descriptive, and thought-provoking prose via an engagingly intelligent third-person narrator.

Minna’s mother Roza abandons her daughter, husband, and their small Ukrainian shtetl after the death of her newborn son when Minna is five. Minna’s aunts are convinced her mother has become a prostitute. There was indeed an epidemic of prostitution in late 19th and early 20th Century Jewish communities, but Ms. Solomon portrays Minna’s aunts and neighbors as poorly educated, narrow minded, and superstitious, in contrast with Minna’s father and later, Minna herself.

After her father’s death when she is 11, Minna’s neighbors and aunts arrange for her to become a domestic servant in the Odessa home of Galina Hurwitz, a middle aged high-end prostitute who refers to her clients as “suitors.” Galina prefers her servants very young, and five years later encourages 16-year-old Minna to find a husband in America by becoming a mail-order bride.

The novel opens with a stark description of the intrusive physical and mental examination Minna endures at the bridal agency offices. Minna imagines she will marry if not a wealthy man at least a comfortable one. It never occurs to her that the only men who engage the services of overseas bridal agencies are the ones who cannot attract prospective brides locally.

“She wasn’t prepared to feel anything but relief at leaving Odessa. . . . She didn’t know then—she didn’t know yet—that pleasure was its own necessity, as grimly serious as mourning.”

Ms. Solomon’s language can sometimes be coarse, as in an early scene during the harrowing ocean voyage in steerage where Minna changes a pogrom victim fellow passenger’s head wound bandage:

“Then she saw the man anew, as if she were looking down on a forest; she saw how in the midst of his thick hair and thick beard, his clearing of flesh was perverse. Like a cat’s asshole suddenly exposed.”

Minna arrives in New York, and instead of being met by her prospective husband, she is greeted by the younger of his two teenage sons who escorts her on a journey by train and horse-drawn wagon to their homestead in South Dakota. This may sound far-fetched but in fact is historically accurate; there was indeed a movement at the time for wealthy Jews to enable new immigrants to become farmers to keep them out of overcrowded urban slums.

Max, Minna’s betrothed, turns out to be older than her father would have been had he still been alive, like he was abandoned by his first wife, and unlike her father is religiously observant. “She wondered if Max was disappointed by her youth as she was by his age.” Despite Max’s age, obvious poverty and an attraction to his older son, Minna decides to marry Max, as is expected of her, perhaps out of a longing to belong to a family again.

Max turns out to be a tender but in multiple ways a clueless man: less well educated, open-minded, and resourceful than Minna’s late father. Readers may have to remind themselves that on the 19th century American frontier, marriages between 16 year olds and forty year olds were not considered statutory rape.

Ms. Solomon captures the hardships and austerity of pioneer life, including descriptions of a winter of near famine, which fainthearted readers may be reluctant to endure. Those readers who do stick with it will share the characters’ relief when spring finally arrives. Here is Minna’s description of autumn:

“Just beyond the shed wall, in the spot where they had grand plans to build a privy, the ground was streaked with urine. Nothing soaked in anymore; everything ran. This seemed to be the way of fall here: no startling color, just a general hardening that took the soil, the grass, the sand in the creek. Most of the cottonwood leaves didn’t even bother unhinging, they simply turned brown and crisp and knocked each other when the branches shook. The wind was a new thing yet again: it gained intention; it curved and dipped and homed in.”

Ms. Solomon based the book on two memoirs of 19th century Jewish pioneer women; one was a namesake who settled in Arizona with her husband and whom Ms. Solomon discovered while Googling herself, and the other was a mail-order bride who homesteaded with her husband in North Dakota.

There are no saints and no villains in The Little Bride. All of the major characters are people whose humanity includes both virtues and shortcomings. I recommend this book to both adult and precocious young adult readers. While young adults might identify with the teenage protagonist, they will also enjoy revisiting it years later once they have accumulated more life experience. This is an auspicious debut, and I look forward to Ms. Solomon’s future work.