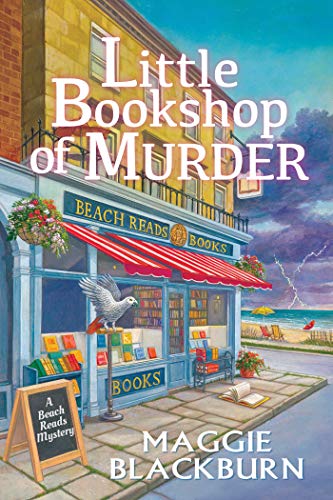 “Blackburn has created a clever mystery that follows a direct path to revelations about the killer, as well as Summer’s growth and acceptance of her inheritance—a bookstore that she never liked and romance novels that she never read.”

Summer Merriweather, a PhD Shakespeare scholar and college professor, has too many things on her plate, including Shakespeare research, a goal for publishing, and job insecurities, when she receives word that her mother has died and she must return to Brigid’s Island, NC.

Her greatest regret is that her relationship with her mother, although not estranged, has been chilly and distant. And she doesn’t look forward to returning. Hildy and Summer had a remote and yet loving bond. Summer, as a college professor was distant from her mother’s somewhat hippy ways. For years Hildy owned Beach Reads, a romance-themed bookstore that catered to the summer tourist crowd. Hildy was much loved by her friends and customers while Summer’s personality is more reserved. She loves literature, hates romances. Not a good combination.

Upon her arrival at home, she discovers several disconcerting things. Her mother’s memorial service is being held in a local church, and yet Hildy had no religious beliefs and never set foot in this or any other church. As Summer begins to ask the obvious questions about her mother’s death, she learns that Hildy had been receiving threatening messages demanding that she sell her bookstore and leave the island. Summer knows that neither demand would be considered for even one moment, and she begins to believe that her mother’s death was not the accidental heart attack that was described to her.

Hildy’s sister, Aunt Agatha, and Summer’s cousin, Piper, and her daughter, Mia, all listen to Summer’s concerns and agree with her. There is something wrong with Hildy’s death.

Here author Maggie Blackburn introduces a cast of characters from one end of the spectrum of odd to the other end of the spectrum of normal. Hildy’s book club members and patrons, Doris, Marilyn, and Gladys (Glads) are sixty-ish ladies who love the bookstore, love romances, and loved Hildy. Each mourns in her own way, but as Summer questions them about her mother’s last moments, she begins to wonder if any of them could have had a role in the death. And what about Poppy, the one paid employee—could she have had anything to do with Hildy’s death?

Soon another candidate surfaces—Rudy Irons, the owner of the local arcade that sits next to Beach Reads. His desire to expand his arcade and his repeated demands that Hildy sell to him place him front and center on Summer’s list.

When Summer takes her concerns to the police chief, Ben Singer, he casts a disbelieving eye toward Summer. He is waiting for a tox report from the coroner, but until he is told anything different, Hildy’s death was a heart attack. Plain and simple. And the fact that Summer left his son standing at the altar many years ago does not play well with the chief.

Summer is convinced that there is more to her mother’s death than the heart attack of an otherwise healthy woman, and she continues to uncover more threatening letters. One evening after Summer, Agatha, and Piper have gone to bed, they are awakened by a fire at the house. It does not take long for Fire Chief Levi Jensen to declare it a case of arson, and Summer is convinced that she is getting close to finding the truth.

At this point, Blackburn introduces the handsome fire chief, and a small amount of interest on Summer’s part, but the interest is never pursued. A chance missed, perhaps.

The fire convinces Chief Singer that there might be more to Hildy’s death, but he is still not persuaded enough to pursue a detailed investigation. One evening as Summer is walking alone on the beach, she is attacked by a mysterious, shadowy figure. Now the stage is set for the chief to dig a little deeper.

The story takes the inevitable turn when Summer learns that her mother’s death was not due to a heart attack, but to a toxic drug, and when Aunt Agatha is kidnapped by the killer the action ramps up.

Throughout the story Blackburn brings additional issues into the story, which adds dimension to Summer’s character and the story itself including: her growing appreciation for romance novels; her mother’s parrot, Darcy; and a friendly witch who was Hildy’s friend and predicts dire things for Summer’s future.

Blackburn has created a clever mystery that follows a direct path to revelations about the killer, as well as Summer’s growth and acceptance of her inheritance—a bookstore that she never liked and romance novels that she never read.

As cozy mysteries go, this is one of the best. A good book for a weekend read.