Lithium: A Doctor, a Drug, and a Breakthrough 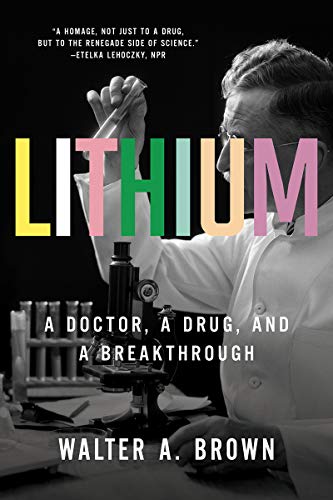 “Lithium provides the reader with an insightful look at the challenges facing the development of effective medications for the treatment of mental illness.”

In an 1854 lecture at the University of Lille, the French scientist Louis Pasteur said “Dans les champs de l'observation le hasard ne favorise que les esprits préparés” For those of us who do not speak French, this translates as” In the field of observation, chance favors the prepared mind.” The annals of scientific discovery are filled with examples of such serendipity—the development of events by chance in a fortunate or beneficial way. The clinical use of lithium for the treatment of manic-depressive (or bipolar) disorder is one outstanding example of serendipity.

The author, Walter A. Brown, has been a practicing psychiatrist and professor at Brown University for more than 40 years. He has contributed to publications such as Scientific American, Scientific American Mind, and Psychology Today. In addition to Lithium, Brown has also published The Placebo Effect in Clinical Practice, exploring some of the unexpected benefits of the use of placebos in treatment.

Lithium begins with a brief history of the development of or understanding of manic-depressive illness, going back to pope Urban VI in the late 1300s. Although two French psychiatrists began formulating the idea of manic-depressive illness as a distinct psychopathology in the mid-1800s, the German psychiatrist Emil Kraepelin put the illness on the map and exerted significant influence over subsequent understanding of the disease.

In the 20th century, psychoanalysis as treatment gradually gave way to a pharmaceutical approach as psychiatrists and others tried to understand mental illness in terms of biochemical imbalances in the brain, using a variety of medications to treat symptoms, often with little success. As the search for treatments for manic-depressive illness was carried out, a chance observation that lithium salts (being used at the time for treatment of gout since lithium could form a soluble complex with the uric acid crystals in the joints of these patients) seemed to be effective in diminishing the symptoms of the disorder. And so the search began.

The main hero of this story is an unassuming scientist by the name of John Cade. This man carried out many of the significant studies to demonstrate the efficacy of lithium and did it without the trappings of much modern research. He did not have massive grant funding, nor did he possess an impressive research lab, but rather worked out of a small room in an abandoned facility.

Cade was a very curious person, not just with regard to lithium. He often would read of some scientific observation (usually far removed from his professional background) and undertake some modest investigation to learn more about it. This inquisitiveness served him well though the years of establishing the value of lithium treatment, even when faced with strong opposition.

The pharmaceutical industry does not come out looking good in this saga. Lithium salts are easily obtained, do not involve complex synthetic approaches, and are reasonably inexpensive. There is little incentive to invest in the clinical trials and development of a drug that will not provide a good return on investment. Lithium salts are naturally occurring, so cannot be patented, ruling out the ability to corner the market on the drug.

New applications for lithium continue to crop up in the news. A recent (July 27, 2020) study published in the British Journal of Psychiatry found that higher concentrations of lithium in drinking water appeared to be correlated with lower suicide rates. Other recent research suggests that low-dose lithium might also be useful in the treatment of Alzheimer’s patients. There are obviously still fruitful avenues to explore with regard to lithium’s role in the treatment of these types of disorders.

Lithium provides the reader with an insightful look at the challenges facing the development of effective medications for the treatment of mental illness. The book traces the convoluted journey of acceptance of lithium in dealing with manic-depressive illness and the controversies associated with demonstration of its efficacy. The debates about the role of clinical trials and how they should be carried out give a clear sense of the issues involved in studying new drugs to be used in patient treatment.