Lit Up Inside: Selected Lyrics 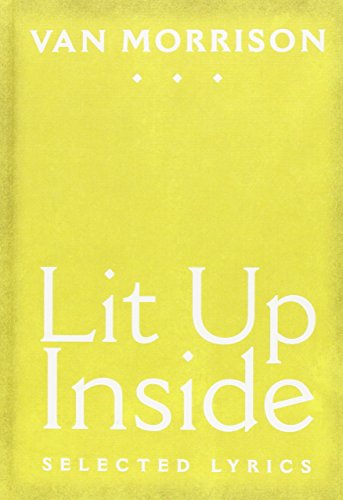 “A volume of prayer, meditation, worship and dance, Lit Up Inside: Selected Lyrics by Van Morrison features the best of a man driven by memory, the power of blues, hymns to the silence and John Lee Hooker.”

Compiling the lyrics from close to one hundred of his songs over his 50-year career, Lit Up Inside: Selected Lyrics by Van Morrison does hold the hits. “Gloria,” “Tupelo Honey,” and “Moondance” are present

But make no mistake, this is not a company-assembled “best of” designed to bring out a few fans at Christmas. This is a life, a mind, a heart, and a soul shown to us through words.

This is a world painted in vivid images and offers up to us a hidden, mythical universe without judgment, without a sales pitch, without a come on or plea that we subscribe to his faith. These are words that more often than not reveal the strength of spirit and share with us the silence of solitude.

The lyrics in this compilation were selected by Morrison himself. This creates a revealing look into the mind of a man who values privacy in the extreme. This is the first book he has ever allowed his name to appear on in an official capacity.

The word “lyrics” in the title is specific. It reminds us that the words he has chosen to live inside his music, the people and places that populate his world, are not poetry. Poetry and lyrics are related in the same way that a traditional, six-string guitar is related to a four-string bass. They are indeed close . . . but they serve separate functions.

In print, the lyrics sometimes assume a new identity and other times hold tightly to the music that originally housed them. Much of that depends on how much familiarity the reader has with the original version.

Reading “Jackie Wilson Said (I’m in Heaven When You Smile),” the words remain a joyous incantation with a spine formed by the electric energy of a teenager discovering infatuation, desire, true connection and love. The words alone make you want to dance.

On the other hand one of his most under-appreciated and least known epics, Summertime in Ancient England, stands wonderfully alone as a straight read.  It is part prayer, a journey to salvation and understanding.

Originally found on the album Common One, the combination of music and lyrics held over fifteen minutes of hypnotic, expanding revelry whipped around incantations and saxophone amidst a growing urgency.

With Morrison as vocalist the song grew naturally. The force built to the declaration “It ain’t why, why. It just is, it just is.” Then the music slows to match that deepening realization.

Without the music swelling behind the lyrics, we can read his plea as a prayer, we read it all as part of a much bigger question. When he closes by asking “Can you feel the silence?” his side of the dialogue challenges us. Is he seeking the comfort of a loved one, the comfort of God or telling us that it is all truly shrouded in the silence itself? Are the answers within, or out there, or on the shoulder of a loved one?

But for all his seriousness he never abandons music.

Buddy Holly said we should Rave On. Van Morrison wants us to do the same but he also asks that Donne, Yeats, Whitman, Khayyam and Kerouac join us. Where Holly lived in the moment Morrison asks that we do the same across the Industrial Revolution, Empiricism, and the Atomic Age and The Golden Dawn.

In writing Morrison has never been shy about name checking his influences and what he loves. In “Rave on, John Done/Rave on, Part Two” he places the poet at the center of it all. He does the same in “Tore Down á la Rimbaud,” which stands as both a thank you and rant against the inability to write.

His connection to literature is as deep as his connection to the blues. Morrison considers music to be as much of a poetic inspiration as are the poets. Wavelength is a pure celebration of the radio as a conduit of life itself. He knows it will never let us down. In “Summertime in England” he whispers of Mahalia Jackson coming through the ether.

At the heart of so much of his writing is the love of Ireland. Specifically the city of Belfast. His home becomes mythologized as not only a real entity, but part of the eternal world, a part of us all. In “On Hyndford Street” (which also holds the title of this volume) we walk with him down the streets, reveling in the silence of memory.

Silence, in all its forms, is an important thread throughout his writing. For a man tethered to the earth by the bone rattling growls of John Lee Hooker, and the rattle created by an electric guitar Van Morrison loves the silence. He speaks of it often. Not just as a condition, not just as quiet, but as a place inside us all.

It was Morrison who approached City Lights Books to collect and publish his work. The famed publishing house based in San Francisco was started by American poet Lawrence Ferlinghetti and is the best possible house to bring out the American version of this collection.

Their connection to Morrison’s work is emphasized inside David Meltzer’s forward. Our understanding of Morrison’s influences is brought to light in the introduction by Eamonn Hughes, of Queen’s University, Belfast/Poet.

A volume of prayer, meditation, worship and dance, Lit Up Inside: Selected Lyrics by Van Morrison features the best of a man driven by memory, the power of blues, hymns to the silence and John Lee Hooker.