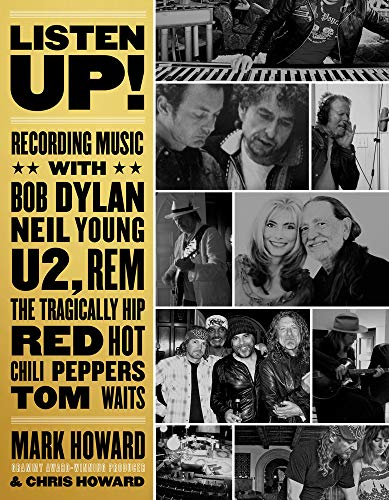 “Renowned producer Mark Howard’s Listen Up! splits the difference between celebrity insights and tech-head talk, offering up candid but affectionate portraits of some of rock’s most famous names, while delving into the wizardry that captured their sounds.”

Accounts of the making of rock albums usually lean in one of two directions: either a blow-by-blow technical account of the proceedings, or a gossipy tell-all about the sometimes mercurial, often brilliant artists behind the music. Renowned producer Mark Howard’s Listen Up! splits the difference between celebrity insights and tech-head talk, offering up candid but affectionate portraits of some of rock’s most famous names, while delving into the wizardry that captured their sounds.

Howard has worked with a who’s who roster of legends spanning generations and genres—everyone from Willie Nelson to Mumford and Sons, from Iggy Pop to Lucinda Williams. Reflecting on his career in chronological fashion, he begins with his formative years as a recording engineer with Daniel Lanois and the Neville Brothers in New Orleans, then covers the construction of his own recording studios in the Big Easy and southern California, his breakthrough work with Bob Dylan and Tom Waits, and his latter-day travels with his mobile recording studio in his Airstream trailer. In the process, he provides a vivid snapshot of what it means to be a producer in the business, where one must be a real estate agent, gear importer, accountant, caterer, den mother or muse, as dictated by the moment.

Those with an interest in the minutiae of music production will find much to savor in Howard’s breakdowns of his recording environments; his copious gear mentions and tidbits on recording techniques should provide plenty of inspiration for tyro engineers.

An amiable and laid-back storyteller, Howard sprinkles in breezy reminiscences about the artists he’s worked with. His recollections range from the quirky (Neil Young insisting on only recording three days ahead of a full moon) to the revealing (Dylan citing Al Jolson and Frank Sinatra as his favorite vocalists), to the downright idiosyncratic (Waits’ incorporation of “found sounds” in his music, including pots, pans and slammed bathroom stall doors).

As in most rock memoirs, large amounts of booze and drugs are ingested, and Howard’s love of motorcycles (which ranks second only to his love of recording) often takes center stage, including an amusing bit in which Dylan nearly kills himself on one of Howard’s modded-up bikes.

But Howard is less interested in telling tales out of school than he is in walking through the creative process. He focuses on the time-intensive, often back-breaking work of scavenging gear, setting up a studio, creating the right ambience, and goosing powerful performances from his artists.

More of a hardened optimist than a dreamer, Howard doesn’t hold back from addressing the unglamorous side of his profession: the ways in which talent can be taken advantage of (in one episode, Howard is suckered into unwittingly recording an EP for Mumford and Sons), his sometimes fractious relationships with fellow producers (Lanois in particular emerges as a talented but moody taskmaster), or the financial difficulty of maintaining a studio during an era in which the music industry saw a downturn in its fortunes. And yet, all the heartaches can be wiped away by the thrill of listening to a newly minted recording while cruising down California’s Highway 1, as Howard does in a particularly vibrant passage.

Howard’s narrative is a tumble of events, and while some are more memorable than others, emphasis is rightfully placed on his award-winning work with Dylan on Time Out of Mind. Much of the chapter on the album’s genesis is devoted to how Howard spent interminable hours of experimentation to arrive at an elusive, rough-hewn “sound” that met Dylan’s satisfaction.

Moments like this remind us of the almost alchemical ways in which a recording comes together, when one version of an album is better than the others based on nothing more than the right “feeling.” Other noteworthy, more humorous incidents include a fraught recording session in a Baja studio crammed with scorpions, and a face-off with notorious vegan Chrissie Hynde over a hot dog.

Above all else, it is clear that Howard is all about the music life, often to the exclusion of personal introspection. Precious little is revealed about his family, apart from the fact that his first daughter was born just after the recording of a Marianne Faithfull album.

In one chapter Howard details a trip with his wife to Latin America, and a few chapters later, his wife has been replaced with a new girlfriend, with no explanation. Perhaps it is fitting that Howard remains circumspect about his own history—in the gypsy-like, to-and-fro existence of a music producer, there is only the next project, the next studio to setup or breakdown.

The bittersweet conclusion of Howard’s story finds him back in New Orleans, where it all started. The studio he once built has become a gaudy, nouveau riche residence, but an opportunity to record with Rickie Lee Jones’ daughter serves as the passing of the torch from one generation to the next.

Nomadic as ever and still pushing recording techniques to the limit, much like the Harley and Vincent motorcycles he rides, Howard remains both an exemplar and living reminder of a vital period of rock history, and Listen Up! serves as a valuable document of his career.