Listen to the Marriage: A Novel 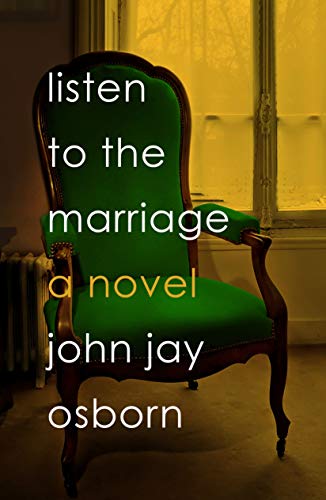 The institution of marriage is not something one should enter into lightly. It's the combination of two different parties to create one unit. Each party brings their own perception of what they expect their marriage to be like as well as their personal beliefs, ethics, and ways of thinking. It is easy to see the preconception of wedded bliss fade as everyday life takes over and one realizes it's not all wine and roses.

This is the case with Gretchen and Steve, two hard-working type A personalities who are watching their relationship crumble around them. The parents of two young children, both Steve and Gretchen are stressed to the max. Steve recently bought into a partnership in a private equity firm causing him to work long hours and deal with high-stress situations. Meanwhile, Gretchen, an English college professor, is hoping to attain tenure, which puts pressure on her. Trying to stay on top with their careers, keep a home, and raise their children is adding to the strain.

When Gretchen learns Steve has had an affair with her one of her best friends, she forces him to leave their home. She is beyond hurt and anger, yet the two decide to go for therapy. They meet with Sandy Hyland, a marriage counselor, though Gretchen is adamant they are headed for divorce. Sandy affirms if this were the fact, they wouldn't be seeking her advice.

This entire novel takes place inside Sandy Hyland's office as the three go toe-to-toe to get to the crux of their problems. Steve is remorseful, but that doesn't assuage Gretchen's anger or hurt. Part of their beginning therapy goes like this:

. . . Sandy said, "One of Gretchen's most important projects in life has been making you better, making you into a better person. She's tried and tried. Only she keeps failing. You know why?"

Sandy ignored the joke and looked hard at Steve.

"Because you perceive her efforts as criticism," Sandy said. "She's trying to make you better, but all she's managed to do it make you angry and set you up to cheat on her because your feelings are hurt and you feel unloved."

As Sandy digs deeper into their feelings, the main point of her focus deals with communication; specifically, they hear what is being said, but they do not listen.

Months into weekly sessions with Sandy bring out the true feelings Gretchen and Steve have for each other, but is that enough to keep their marriage going, or are they too far past that point? Listen to the Marriage could be a beneficial read for any couple in a long-term relationship or marriage. The blush of the honeymoon may be long over, and despite hurt and pain—or if there is none—this novel can be a guide to discover if their partnership is viable or to help strengthen it.