The Lions' Den: Zionism and the Left from Hannah Arendt to Noam Chomsky 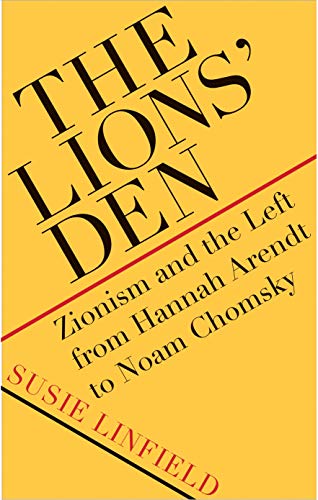 “an effective attempt to inform and enlighten readers on a topic of immense importance. It’s also a topic that becomes ever more crucial to understand as tensions once again escalate in the Middle East.”

For anyone grappling with the neverending conflict between Israel and the Palestinian people, Susie Linfield’s book may be helpful—that is, if it doesn’t render readers more confused than ever as they revisit their own opinions on the current situation.

Examining the views of eight formidable figures with strong and often inconsistent views of Zionism from philosophical, historical, and intellectual viewpoints, Linfield explores and exposes the complexities and passions that have always engulfed discussions or debates around Israel’s existence, Palestinian persecution, nationalism, socialism, and more. To make matters more interesting, she includes her own view of her subjects and their shifting positions over time.

First and most well known of the people whose views she explains or excoriates is Hannah Arendt, the German-born, Jewish philosopher and author of The Origins of Totalitarianism and Eichmann in Jerusalem. Arendt was both adored and reviled when she wrote about the Holocaust and its aftermath. Many Jews charged her with anti-Semitism. Some called her “a saint, a sinner, a prophet, a traitor, a goddess or a devil.” Linfield takes nearly 60 pages to make her case that the noted thinker was “none of those things.”

“Arendt wrestled with Zionism, and then with Israel, for over three decades: with force and passion, respect and scorn,” Linfield says. She argues that there is always “something right and something dubiously selective” about Arendt’s ever-changing views, whether she was writing about what she saw as troubling aspects of nation-states or the essential questions associated with Zionism, which Linfield argues Arendt thought of as an antidote to a “apolitical worldlessness” that “defined Jewish character.” And that’s just for starters. Linfield uses the next 40 pages to examine Arendt’s positions on Jewish shame, Jewish honor, and Jewish identity against the critical backdrop of the politics of her time.

Those who have admired Arendt’s thinking and writing are likely to dislike her more than they did before reading Linfield’s in-depth analysis of her flaws. To her credit, however, Linfield is respectful, whether agreeing with or reproaching Arendt, as well as each of the other deep thinkers whose work she explores in this important, timely, and sometimes fierce book.

Linfield is no slouch herself when it comes to positing political or intellectual positions, and her knowledge of relevant history is impressive and well-documented. And she, too, can be inconsistent or opinionated at times. But there is no denying that she is also a brilliant thinker and a compelling writer.

Noam Chomsky, icon of the American left, is the other bookend in this treatise, and one wonders why, given Linfield’s obvious disdain for him and his positions. Acknowledging that Chomsky’s “knowledge of the Arab-Israeli conflict is viewed as deep and wide (except by Israelis, who pay him no heed) and in the Arab world, where he is little known,” she then says “the most shocking thing one learns when immersing oneself in [his] Middle East writings is how inaccurate these descriptions are.”

With that, she is off to the condemnation races, but again, with the magnified lens of a good historian and original thinker. She concludes her profile of Chomsky with this: “When you immerse yourself in Chomsky’s writing, you learn an awful lot about how [he] thinks and about [his] obsessions. But you learn little about the world itself.” She charges him with misleading generations of young people, who know little of Middle Eastern history, and who will not see through his deceptions. Like the discussion of Arendt, devotees may be disturbed, but they will not be able to deny the strength of Linfield’s arguments.

In between Arendt and Chomsky, readers contemplate the thinking of the rather unlikeable writer Arthur Koestler, the interesting Maxime Rodinson, an anti-Zionist and French Communist Party member who Linfield accuses of “mounting inexcusably contorted arguments to support his antipathies,” and Isaac Deutscher, who had “an innate feel for the sorrow and tragedy of the Jewish people.” He is best known for his biographies of Leon Trotsky, whom he admired.

Joining these luminaries are Albert Memmi, “a Jew, an Arab, an African, a nationalist, an internationalist, a socialist, and an anti-colonialist,” identities he sought to integrate throughout his life; Fred Halliday, an Irish-born scholar of the the Arab and Muslim worlds; and I. F. Stone, radical 20th century journalist and champion of human rights.

Each of these characters is worthy of several biographies. No doubt numerous Ph.D. theses have tackled their lives from various perspectives. As Linfield says in her conclusion, “Each of these writers struggled for decades to navigate . . . the ‘labyrinth’ of Zionism; their failures prove that the Jewish Question is an ongoing argument with no final answer.”

For all their failures, and the angst her book conjures, The Lions’ Den is at least an effective attempt to inform and enlighten readers on a topic of immense importance. It’s also a topic that becomes ever more crucial to understand as tensions once again escalate in the Middle East