The Lion (A John Corey Novel) 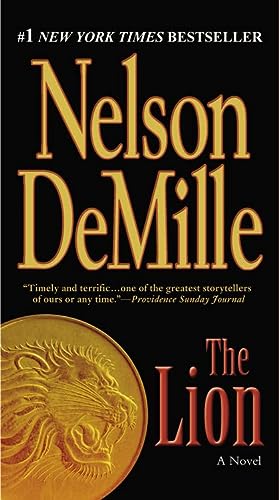 If you pick up this book thinking it has anything to do with an animal, you are partially correct.  The Lion is definitely a story about an animal, but not one that lives in the jungle.  Rather, the animal in DeMille’s newest novel is Asad Khalil; the name Asad in Arabic means lion.  And this human lion is a sadistic, revengeful, calculating killer, one whom the author reprises from his January 2000 novel, The Lion’s Game.

Khalil is a Libyan terrorist with a score to settle.  In 1986, he lost his family in an American bombing raid on Moammar Kaddafi’s compound in Libya.  When DeMille’s readers first met Asad, he had flown to JFK Airport in New York, ostensibly to defect to the West. It was a ruse, and once his plane landed, a nightmare began from which hardly anyone will wake.

The Lion is a unique thriller that blends sarcasm and dry wit with sheer terror and suspense.  The story is graphic in its description of Asad’s killing of the infidels.  The book’s protagonist, however, retired NYPD cop, John Corey, now a contract federal agent, helps the reader through the many rough spots with his condescending wit toward just about everyone and everything.

Corey is a member of the elite Anti Terrorist Task Force, comprised of the FBI and NYPD.  In the book, which mirrors the real world throughout most of the tome, the cops and feds don’t always get along. Having been both—a cop and a fed—this reviewer can speak to the authenticity of the subtly adversarial relationship.

Nevertheless, despite the friction, occasional withholding of information, and turf battles, the results are remarkable.  One only wonders how much more successful would the real-life Joint Terrorist Task Force be if they were synergistic.

DeMille is a Vietnam vet and a New Yorker, two essential ingredients necessary in creating the character of John Corey.  Both the author and character are irreverent and politically incorrect; two traits used quite effectively as comic relief, particularly when Asad eliminates another one of his targets.

Yet do not mistake Corey’s unorthodox, unconventional ways with someone who is ineffective.  On the contrary, the very manner in which Corey skirts protocol allows him to gain better insight and operate more efficiently.  He eschews cumbersome SOP (standard operating procedures), and opts for expediency.  He is not totally unlike the man he is hunting, Cory can also be a killer.  He has no qualms about dispatching thugs and cretins to hell, regardless of who they are and where they have come from.  He is patriotic, loyal, and a street-smart cop. His police background equips him with the ability to spot a bad guy a mile away.

Throughout the book, DeMille’s protagonist speaks to us in the first person.  Using this point of view is very effective with this type of character, particularly when interjecting his dry sense of humor.  The technique works well, allowing us to get inside Cory’s head.  Action and thrills notwithstanding, what really made this book a fantastic read was how DeMille developed John Corey.

My sense is that the book would still be a bestseller, regardless, but Corey puts it over the top.

The timing of the book’s release could not be any better, with three recent terrorist events having occurred in our country.  Terrorism is the topic du jour. This reviewer loves reading thrillers loaded with suspense—and The Lion fits the bill.

It is uncanny how much this story reflects what is happening in our nation.  I’m not sure if the author has a direct pipeline that allows him to glimpse into the inner sanctum of our national security apparatus, but he certainly has his finger on the pulse of antiterrorism in the United States.