The Lion of Sabray: The Afghani Warrior Who Defied the Taliban and Saved the Life of Navy SEAL Marcus Luttrell 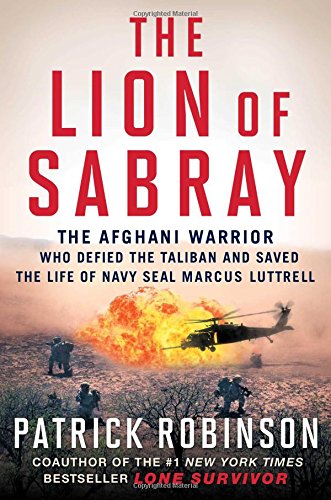 Following the publication of Lone Survivor and the release of its video counterpart of the same name, author Patrick Robinson discovered that there were questions regarding the account by virtue of missing, reclassified information and material. Indeed, many wanted to know the fate of the Afghani man and Mujahideen commander who had put himself, his family, and his community in harm’s way to save the life of Navy SEAL Marcus Luttrell.

With the declassification of documents, files, and other source material, Robinson has crafted a story that not only provides additional context on the U.S. military’s operation to recover Luttrell but also focuses, to a large extent, on the perspective of Mohammed Gulab, Luttrell’s guardian and savior. In effect, it is part biography and part interview and explains the basis for Gulab’s actions.

The author describes Gulab’s early life, his holy warrior experience fighting the Russians in the 1980s (at a very young age, required of all males), and the Pashtun tribal community in which he grew up in the Hindu Kush mountain range of eastern Afghanistan. In particular, there is considerable emphasis on the Pastunwali code of conduct, developed over two thousand years, which effectively requires that one do the right and honorable thing in all of one’s actions, backed by the overarching tenets of Islam.

The code includes ten main principles, the most important of which for Luttrell were those of Melmastia (hospitality), Nanawateh (asylum), Ghayrat (courage) and Nang (honor). The first is extended to all regardless of race, religion, or national origin. The second provides protection to one against his enemies. The third must always be demonstrated by Pashtuns, and the last requires that they defend the weak and vulnerable.

Encountering a seriously wounded Luttrell and believing that he had been instructed by Allah to protect him, these principles were invoked by and guided Gulab in his dealings with the Taliban, notwithstanding the latter’s threats to kill him and his family should the American escape their wrath.

As is well known, Luttrell did avoid their clutches and was recovered by a Special Operations force of Rangers, Green Berets, and Air Rescue. The recovery portrayed in the film is nothing like that described in the text. The actual operation involved air cover and support, suppressing Taliban small arms fire, RPGs and Stinger missiles and, finally, landing the rescue helicopter on the only level area available, the size of a postage stamp, at night in a feat of flying that was described by participants as miraculous.

Once returned to U.S. control, Luttrell was immediately airlifted to medical facilities for treatment and rehabilitation. Meanwhile, Gulab was left behind and felt somewhat abandoned by the military (though any compensation for his actions was counter to the Pashtun code). Luttrell, however, never forgot and, to his credit, was able to re-establish contact with his guardian, bring him to the United States for a visit and has since provided some measure of support for Gulab’s community.

In the end, Gulab has returned to Afghanistan, following a role as an adviser on the film, but is forced to spend his days looking over his shoulder, worrying for the safety of his family and fearing the Taliban’s retribution for his refusal to turn over the American Special Forces operative; however, he and Luttrell will always be bound by their experience.

If there is any criticism to be made, it is that there are places in the text where the writing gives the impression of an almost juvenile tone or style. A reader might wonder if it is Gulab, who knows no English, or the author “speaking,” notwithstanding the fact that quotations are properly noted by indentations. Otherwise, it is a well written and informative account about the real rescue/recovery operation and Gulab’s ultimate fate.

The book includes a short note from Gulab, a map of Afghanistan, an inset of the location of where the action transpired, a section of seven photographs—including one of Gulab, and an index.

As a sequel of sorts to the original Lone Survivor, this should close the book, no pun intended, on a single event in the ongoing war on terror in Afghanistan. One that demonstrates, even in the midst of such hatred, death, and destruction, that humanity and compassion can sometimes win out and codes of conduct are not always, or necessarily, paid lip service.