A Line of Blood: A Novel 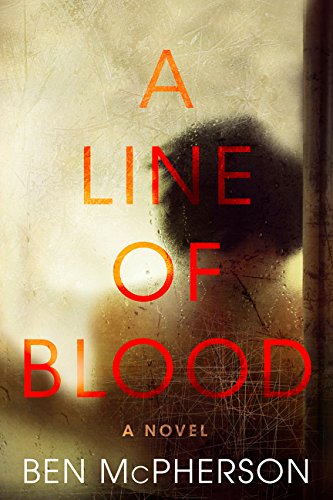 “a novel for those who like their suspense written in dark tones.”

A Line of Blood is a disturbing portrait of a close-knit family breaking apart into its separate components as Alex Mercer’s “little tribe” face questions from the police about a neighbor’s suspicious death.

When Alex Mercer and his eleven-year-old son, Max, follow their fleeing cat into a neighbor’s house, they find more than a runaway feline. “The neighbor was in the bathtub, on his back, his legs and arms thrown out at discordant angles, his nakedness was angry, brittle, the tendons drawn tight, as if something in his body was broken and could not be repaired.”

Alex’s first reaction is to laugh although he doesn’t know why. His inability to correctly analyze his own bizarre behavior is a character trait that reappears throughout the book. Only after he sees the iron in the bathtub does it occur to him that this is an ugly suicide that he should prevent his son from seeing. “A father . . . does not expose his beloved son to the jarring, naked obscenity of suicide through electrocution.”

But is it suicide? The police are not so accepting of Alex’s conclusion, especially when they find his wife Millicent’s bracelet under the victim’s bed. Added to that discovery is the statement by the Mercer’s elderly neighbor, Mr. Ashani, that he overheard a loud argument between Alex and Millicent a day or so before the discovery of the body. The police suspect Alex discovered his wife’s affair with the victim, providing Alex with a classic motive for murder.

Alex knows nothing about an affair until Millicent confesses that the police found the bracelet. Millicent first denies having an affair, but does admit that she knew the victim. Alex is furious. “I watched her go, the anger of the righteous man coursing through me, dangerously electric.”

As Millicent gradually reveals the truth of her affair, the disintegration of the family structure continues, but Alex convinces himself that “A drunken kiss and a flash of flesh on flesh were tiny pricks of light in the cosmic chart of infidelity.”

It isn’t that Alex doesn’t have secrets of his own. A womanizer in the first degree before his marriage, Alex has a secret of his own: Years ago he stalked a former girlfriend until she took out a restraining order against him. That sort of information will increase the police’s suspicion that he may be violent enough to murder the neighbor.

The stress on the family structure increases when Alex discovers that young Max knows about his mother’s affair. The boy is coldly judgmental, describing her behavior in profane language. He tells his therapist that he believes Alex will leave Millicent despite his father’s declaration that he has forgiven her.

Still the revelations about Millicent’s relationship with the neighbor continue, like drops of acid that corrode the family. That Alex would continue to forgive her, even her leaving Max alone at night to go next door for an assignation with the dead victim, is a bit unrealistic. Only Alex’s concern with preserving his family, his “little tribe,” explains his behavior, because ordinarily the extent of Millicent’s infidelity would result in a complete rupture of his relationship with his wife.

If it seems to Alex that his life could not get any worse, his father dies. While Alex is in Scotland consoling his newly widowed mother, Millicent is arrested. Her alibi for the time of the neighbor’s deaths turns out to be porous. Now Alex must deal with his wife’s arrest and its effect on Max, as well as his memories of his relationship with his abusive father.

Then there is the question of what Max wrote in his diary and the meaning of the pictures he drew.

A Line of Blood by Ben McPherson is a compelling read for its vivid portrait of a family whose secrets are hidden behind a mask of normalcy until a violent act rips it away. The book does have a weakness in that the identity of the murderer is not much of a mystery after the halfway point. Add to that the fact that while the characters are realistically drawn, they are not particularly likeable. This is a novel for those who like their suspense written in dark tones.