The Lindbergh Nanny: A Novel 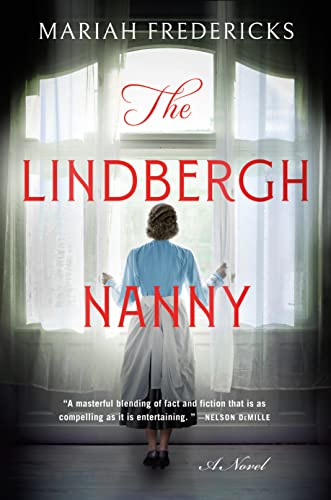 “Anyone who is even remotely familiar with the Lindbergh kidnapping case knows how it ended, but Fredericks’ take on the story from the viewpoint of the Lindbergh nanny provides new insight into how those closest reacted and suffered.”

As Mariah Fredericks states in her endnotes, “The Lindbergh Nanny is not a work of investigative nonfiction. It is a novel, based on biographies, histories of the case, and a range of sources including websites dedicated to the crime.”

Call it what you may, this is creative nonfiction in its best form. Fredericks has meticulously researched one of the major crimes of the 20th century, the Lindbergh kidnapping, with a focus on Betty Gow, the Lindbergh nanny.

Betty was a young woman, originally from Scotland, when she interviewed with Charles and Anne Morrow Lindbergh for the position of nanny for their first child, Charles. It was a position she did not expect to get, and yet she was the chosen one.

Charles Lindbergh is set in how his son will be raised: the child is not to be coddled but is to allow himself to find his way through the world. Anne is not in total agreement with her husband but allows his decisions to be followed.

Through Betty’s first-person point of view, the reader sees the family and staff as Fredericks designs them. Charles and Anne are somewhat opposites in that care for Charlie does not always go as Charles dictated if he is not around. Anne ‘s wealthy mother and father love Charlie and care for him much as Betty does.

The Lindbergh staff behave one way when in the presence of the family, but their downstairs attitudes frequently are not as positive as one would think they should be. Charles Henry Ellerson, the chauffer, is a gambler and always in debt to someone; Violet Sharpe is the housemaid who loves the butler, Banks, and she often parties too much; Banks, older than Violet, never made good on his marriage proposal to the young maid; Elsie and Olly Whately, the housekeepers of Hopewell, have secrets of their own to keep.

The Hopewell staff was larger than this, but Fredericks focuses on those who play a part in the kidnapping of Charlie and the subsequent investigation and trial of Richard Hauptmann, the man charged with the crime.

Fredericks develops characters outside of the family through Betty’s eyes, and Henry “Red” Johnson is introduced as Betty’s love match. The relationship weights heavily on Betty after the kidnapping as she recollects the event and recalls each of these characters and what role, if any, they might have had in it.

The first half of the book introduces each of the characters in deep detail and the reader wanders into Betty’s mind as she considers those around her, “Sympathy is a strange current, not easily controlled. It flows through the chill of dislike, the tension of mistrust. You can have your mind set: I don’t care about this person. Even, I hate this person. And yet, in a moment—they turn their head, the shoulders slump—and the heart inclines toward them.”

Betty’s personal history prior to her work with the Lindberghs gives the reader insight into what type of person she is, and how she handles events that occur around her. In particular, her bond with Charlie grows stronger with each passing day.

It stands to reason, therefore, that when Charlie is kidnapped, then found, and when she is taken to identify the body, her anxiety reaches extreme heights. “As we walk into the room, I feel revulsion. This place is so cold and antiseptic, all steel and tile, the acrid smell of astringent. From the corner of my eye, I see the one bit of softness in the room, a white sheet. Then far quicker than expected, Mr. Swayze says, ‘All right.’ And whips it away.”

“I don’t see it. I don’t understand the noise I make—a strangled whoop, as if someone’s driven their fist into my belly. And yet I spin, groping for the door. But the policemen block my way.”

As the story progresses through the investigation, the reader experiences the confusion, anger, and frustration that Betty experiences when the newspapers and general public need someone to blame; someone from the inside who worked with the kidnapper(s), and Betty is the chosen one.

As the investigation stalls, Betty begins her own search for the truth and goes down several distressing paths. Eventually she leaves the family and returns to Scotland to live with her family there, and yet the angst of the public follows her.

It isn’t until many months later that the investigation becomes active once again and a German immigrant, Richard Hauptmann, is arrested, that Betty is required to return to America to testify. She is treated badly by the defense lawyer, yet she retains her calm, and the public attitude turns from being derisive to applauding her courage.

Anyone who is even remotely familiar with the Lindbergh kidnapping case knows how it ended, but Fredericks’ take on the story from the viewpoint of the Lindbergh nanny provides new insight into how those closest reacted and suffered.