Lincoln's Spies: Their Secret War to Save a Nation 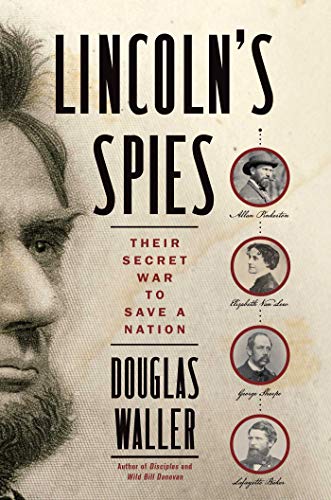 “a fascinating account of spies and counter-spies during the Civil War . . .”

When the Civil War began in April 1861, neither the Union nor Confederate governments or militaries had any real experience with espionage, counter-intelligence, or what today would be called clandestine operations. Spies were considered by most Americans at the time with the same wariness as large standing armies.

However, the need to determine the opponent’s capabilities and intentions soon spawned what could only be termed as a mixed bag of amateurs and opportunists seeking to help the Union cause. In this new volume, Douglas Waller examines the role of spies and agents in the Eastern Theater of the war using a combination of biography and narrative to consider the contributions of four key participants of the Union’s clandestine efforts throughout the war:  Allan Pinkerton, Lafayette Baker, George Sharpe, and Elizabeth Van Lew. Each of these four played a unique role in the Union war effort, although not always in a totally professional or ethical manner.

Pinkerton and Baker are the most colorful characters, exhibiting both patriotism and deep personal flaws, which the author explores in some detail. While both exhibited remarkable aptitude for rooting out Southern sympathizers and corrupt officials in the Federal capital and surrounding areas, they had less success as intelligence chieftains.

Pinkerton quickly became a devotee of George McClellan and was appointed his de facto intelligence chief. Although he created a rudimentary organization to run agents and collect and analyze intelligence, he often grossly overestimated Confederate troop strengths, feeding the hesitation and insecurities of the naturally cautious General McClellan, eventually leading to both their dismissals in the fall of 1862.

Baker became a ruthless, but mostly effective counterespionage master, but his zealousness canceled his own flaws and corruption, including questionable confiscation of private property and using his position to line his own pockets.  Baker’s only enduring claim to fame was his role in capturing John Wilkes Booth, to which he made a major contribution, only to degenerate into a bitter argument with the government over the large bounty put on Booth.

However, since both Pinkerton and Baker spent significant efforts after the war to exaggerate their service and success, they are better known than George Sharpe or Elizabeth Van Lew, who were significantly more effective at their intelligence efforts and made enduring contributions throughout the entire war.

Colonel George Sharpe could be credited with creating the U.S. Army’s first genuine all-source intelligence analysis group. Taking over for Pinkerton when General Joe Hooker took command of the Army of the Potomac, Sharpe was granted control over all of the army’s intelligence efforts, and he quickly built an efficient machine that combined reports from deserters, runaway slaves, friendly civilians, and cavalry scouts.

His methodical approach to sorting the wheat from the chaff, as the army was often inundated with rumor and gossip, allowed his Bureau of Military Information to create a remarkably accurate order-of-battle of Lee’s Army of Northern Virginia down to the regimental level. This detail provided a major advantage to General Meade during the final day of the Battle of Gettysburg when Sharpe was able to confidently state that all of Lee’s army had been engaged in combat except for Pickett’s Division, creating confidence for General Meade and his commanders that they could withstand Lee’s final fateful assault.

Elizabeth Van Lew was a Union sympathizer who built the most effective Union spy ring operating in the Confederate capital of Richmond. Intelligent, resourceful, and determined, Van Lew ran a prolific and productive spy network while constantly outwitting increasingly suspicious Confederate authorities. Not only was she able to pass a steady stream of information north, she also aided escaped Union prisoners and runaway slaves, hiding them in her house at tremendous personal risk.

During the final months of the war, as both armies occupied siege lines around the city, Van Lew and Sharpe were able to effectively work across the static front, providing critical information on the collapsing Confederate government and the deterioration of Lee’s army.

Unfortunately, once the fighting ended, these four contributors to Union victory fell mostly on hard times, Van Lew dying nearly destitute while both Baker and Pinkerton enjoyed some brief notoriety before fading away. Even George Sharpe never received all the thanks or recognition he felt was due, taking a series of government positions before dying in 1900.

The author does an excellent job of weaving together these four very different people into a fascinating account of spies and counter-spies during the Civil War.  Weaving together the ground-breaking research on Civil War espionage by historians Edwin C. Fishel and William B. Feis with many new primary sources, the skullduggery waged on behalf of Abraham Lincoln and the Union is told with a flowing style that truly reads like a 19th century spy serial and is a welcome addition to any Civil War bookshelf.