Lincoln's Mentors: The Education of a Leader 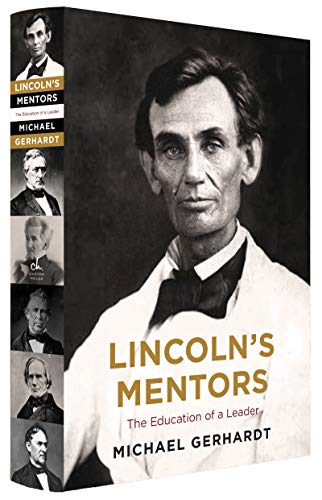 “Gerhardt is fluent in Lincoln history and political philosophy, but he stays close to his aspiration for the book—not to cover every event, but to demonstrate how an untutored, Western, small town lawyer could make himself into the most eloquent and influential president the country ever had.”

There are more than 15,000 books written about the life of Abraham Lincoln, the 16th president of the United States. Surely this abundant Lincoln library covers every possible retelling of the stories of the bearded and lanky Illinois lawyer who saved the Union and freed the slaves. What could justify another book on Lincoln?

The reason why Lincoln’s Mentors is a worthy addition to the Lincoln bibliotheca is the range of skills brought to the project by Professor Michael Gerhardt, the Burton Craig Distinguished Professor of Jurisprudence at the University of North Carolina. Gerhardt has always been a first-rate scholar. Well known as a legal academic, Gerhardt came to the attention of the public as an invited expert asked to testify in the first Trump impeachment hearings in the House of Representatives. This fine work on Lincoln was well underway long before Gerhardt became a media personality.

Legal academics and public witnesses do not necessarily write great books that are accessible to the informed public. Gerhardt is the clear exception. His tome on Lincoln is unique, combining well-known facts from the life of our greatest president with a command of the sources of Lincoln’s philosophy and language.

Lincoln was self-taught with little formal education. He consumed books, newspapers, plays, and poetry. He learned to be a lawyer by reading books. He learned to write his speeches by studying poetry and drama. He learned how to wage war by borrowing books from the Library of Congress that he read as president. Gerhardt takes it one step further. Lincoln learned about public policy by reading the words of the men who had led our country.

Foremost among Lincoln’s mentors was Henry Clay, the premier leader of the Whig party. Gerhardt demonstrates Clay’s influence on Lincoln throughout his public life. The Whigs believed that the federal government played a critical role in developing the nation. Lincoln quoted Clay often in his public speeches, including during his famous seven-debate circuit against Stephen Douglas in the 1858 Illinois Senate race. Curiously, Lincoln also found guidance in the philosophy of Andrew Jackson, the rival of Clay but an inspiration to President Lincoln particularly during the trying times of the Civil War. Gerhardt identifies other mentors such as Daniel Webster, but none had the influence of Clay and Jackson.

Gerhardt emphasizes aspects of Lincoln’s life often forgotten. He was a master politician, devising ways to tell the people of Illinois and later the United States about his policies at a time when the bane of slavery divided the nation. Lincoln was not an abolitionist, but he recognized the evils of enslavement. He was certainly a nationalist, believing in the sanctity of the Constitution and the Declaration of Independence.

Professor Gerhardt is a splendid writer of nonfiction. His storyline is clear and resonant. The author is fluent in Lincoln history and political philosophy, but he stays close to his aspiration for the book—not to cover every event, but to demonstrate how an untutored, Western, small town lawyer could make himself into the most eloquent and influential president the country has ever had.