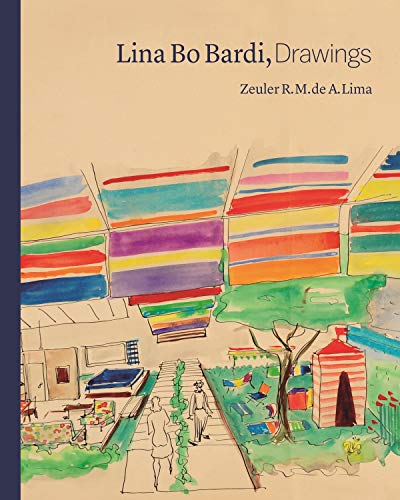 The publication of this book coincides with an exhibit of the work of Lina Bo Bardi at the Fundació Joan Miró in Barcelona, Spain. The exhibit opened on February 15, 2019 and closed on May 19, 2019.

The curator of the exhibit, Zeuler R. M. de A. Mila, has edited this collection of her drawings, which are expertly reproduced in the pages of Lina Bo Bardi, Drawings.

Of the 6,000 or so drawings she made during her lifetime, only 100 were included in the exhibit. They are also in this text.

An architect, a long time student of Bo Bardi’s work—and an associate professor of history, theory, and design at the School of Design and Visual Arts at Washington University in St. Louis— de A. Mila has academic credentials galore, but he doesn’t show depth of understanding for the drawings he writes about and means to extol.

While he praises Bo Bardi as an architect who loved to make drawings, he doesn't describe her as an artist, which she certainly was. He calls her drawings, “marks on paper,” and insists that she didn't want them to be “pieces with independent aesthetic purpose.”

(Did he mean to be facetious when he used the phrase, “marks on paper?” Perhaps he did. In any cases it seems patronizing.)

Imbued with an appreciation for beauty, form and color, Bo Bardi made far more than “marks on paper.”

Behind all of her work, there’s an “aesthetic” that was both utopian and utilitarian. She made drawings for chairs, model houses, restaurants and corporate headquarters. A practical visionary, Bo Bardi used her art to tell stories

It’s best to thumb quickly through the written words in this book and go right to Bo Bardi’s artwork, though some of the biographical information is helpful.

Born in Rome, Italy in 1914, she came of age during the regime of Benito Mussolini, and moved to Brazil as soon as she could, which was in 1946, a year after the end of World War II and Mussolini’s death.

Bo Bardi died in San Paulo at the age of 77 in 1992 after more than 50 years of creative work as an artist and an architect who changed the landscapes and the cityscapes in a country she learned to love.

Call her the Frank Lloyd Wright of Brazil.

What de A. Mila doesn’t say in this book, perhaps because he fears it might prejudice viewers of Bo Bardi’s work, is that she was a member of the Italian Communist Party and actively resisted fascism.

Wikipedia offers fascinating biographical details absent from Lina Bo Bard, Drawings: that her father opposed her decision to study architecture; that her own studio was bombed by the aircraft of the allies in 1943; and that she survived the war by going to work for Italian newspapers and magazines.

The biographical facts don’t explain Bo Bardi’s work, but they provide a context that makes them richer and more complex than they might initially appear.

Her early work, from the 1920s, isn’t overly political or ideological, but it expresses a sense of beauty, love, and joy that was antithetical to Mussolini’s regime. A pencil and watercolor work from 1925, which depicts a dead tree, seems allegorical.

Several works from 1930, made with watercolors, gauche, and pencil on card stock, offer colorful representations of Italian public life before the coming of World War II. To describe them as “cartoonish” isn’t to belittle them, but rather to suggest a kind of folk quality that went along with a certain sophistication and sense of social satire.

Bo Bardi’s early work also presents the female form, from youth to old age and is both realistic and archetypical. “Medaglione” depicts a nude female with long red hair who is surrounded by both flowers and stars and who is both earthy and celestial: a representation of Mother Earth.

An undated work, probably from the early 1930s, offers a near-perfect copy of Albrecht Dürer’s 1503 “Head of the Dead Christ.”

In 1946, Bo Bardi made a sketch of the port of Naples as she sailed from Italy. That same year she created a large, playful drawing of Rio de Janeiro that shows people in the streets and in an adjacent public park.

Almost all the figures carry an umbrella. Despite the rain, the scene is infused with an air of festivity.

From the 1950s to the 1980s, she was productive, creative, and versatile. In the 1960s, she designed costumes for the theater, namely productions of the work of Camus and Brecht.

While she adopted Brazilian motifs and adapted to the popular culture and the landscapes of her adopted country, she retained her Italian perspective and saw Brazil through the eyes of a woman who was born and raised in Rome.

Her sketch of a snack bar for the sports and leisure center in São Paulo is absolutely delightful, with intricate details and words as well as colorful cartoon like figures.

In his acknowledgements at the back of the book, de A. Lima offers the hope that readers will be drawn to Bo Bard’s “marks, lines and color.”

Brazilians have long known she was a genius. Her drawings will help to introduce her work as both an artist and an architect to a wider circle than she has so far enjoyed in the U.S.