The Lights Go Out in Lychford (Witches of Lychford) 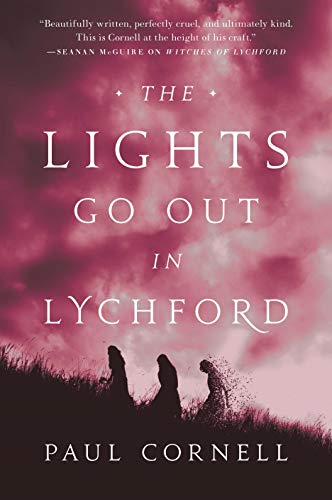 “In this entry in the series, the characters are at their most human, touching as it does on that one condition every person secretly fears, the loss of self.”

Things are going awry in Lychford. It wasn’t so long ago Judith Mawson, the resident wise woman, and her apprentice, Autumn Blunstone, with the Rverend Lizzie Blackmore had battled something eating away at the borders of the little town, but now there’s another danger, and Judith doesn’t know what to do.

“She was the wise woman, the hedge witch, who’d bathed in the waters of the well in the woods decades ago and had spent her days since protecting Lychford from evil.”

Judith has become forgetful. She can feel her own self slowly dissolving, one brain cell at a time.

Judith knows the present threat has something to do with a person named Maitland Picton, a person who came recently to speak at the college and has stayed.

Autumn has tried to find information on Maitland Picton, but what she finds is confusing. People say they remember her, in fact, they swear it, but when asked for facts, they can’t say where or when.

“We think she’s here in Lychford to take a look around and report back to whatever weirdness is waiting out there to invade.”

Even odder, Maitland has been asking people what their most secret wishes are and promising they’ll be fulfilled.

Whatever is coming is going to happen at the Lychford Festival and the three witches know it’s going to be bad.

So bad it may require a sacrifice from one of them.

But sacrifices can work both ways.

As with the other Lychford stories, this one is a very short book, a novella, but it contains within its pages a great deal of narrative and wisdom.

Since this story begins shortly after the adventure of A Long Day in Lychford, and the characters aren’t exactly introduced but more or less are by now expected to be recognized, it’s best to read the previous book before picking up The Lights Go Out in Lychford so the reader is to-the-moment in what’s happening. In fact, it’s a good idea to read all the novellas in sequence. They’re not long, so it would take no more time than reading a full-length novel.

There are subtly funny moments, some tongue-in-cheek and pithy with dry humor.

In this entry in the series, the characters are at their most human, touching as it does on that one condition every person secretly fears, the loss of self.

Judith’s plight, her bouts of memory loss and the attempts of those around her to provide for her and soften the blow as she continues to fail is portrayed as a very real threat, even in a world fraught with magic. Apparently, there are some human conditions even magic can’t rectify.