The Lightkeeper's Daughters: A Novel 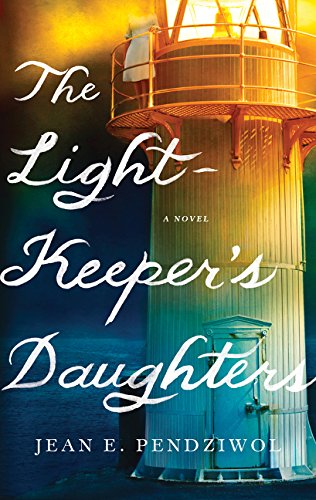 “a remarkable achievement . . . a story of commitment, identity, and familial loyalty that will leave one in tears. Five out of five stars.”

Jean E. Pendziwol’s debut adult novel is a compelling read, rich in historical detail and descriptive narrative. An exploration of the life of a lightkeeper and his family living on an isolated island in Lake Superior, and the secret that twists and eventually blights the close-knit relationships between family members. Poignant and in many ways sad, The Lightkeeper’s Daughters slowly reveals a story of love, commitment, and self-sacrifice that underlies the bond between twin sisters, Elizabeth and Emily.

Elizabeth Livingstone spends her days in a care home on the edge of Lake Superior thinking of the past, remembering Porphyry Island and the lighthouse and her father the lightkeeper. Memory is all she has as her vision is fading until she can only see shadows.

“I have taken to dreaming that I am young again, my hair the color of ravens, my eyes strong . . . I am back on the island of my youth, on the black volcanic beach of Porphyry . . . Emily is there, too, beautiful silent Emily, who always had one foot in the world of dreams.”

When the police come to inform Elizabeth that her older brother, Charlie, has evidently drown while boating on Lake Superior, she admits that she has not spoken to her brother in 60 years, but is certain he was sailing to Porphyry Island.  Her father’s logbooks, missing since his death, are found on Charlie’s boat. She feels the pages of the logbooks, covered with her father’s handwriting that she can no longer see.

She remembers the last time she held the books while Emily held a metal biscuit tin, remembers, too, Charlie grabbing the logbook she held, and screaming at Emily, pushing her toward the open door of the assistant lightkeeper’s house. Charlie, who had always been Emily’s protector.

“Oh, Charlie, what secrets have you kept from me for so many, many years, secrets captured in words penned by our father, Andrew Livingstone, lighthouse keeper at Porphyry Island, secrets so powerful they consumed your love for Emily?”

Also at the care home is Morgan, an orphan and foster child brought in after her grandfather’s death. Possessing only her grandfather’s violin and four unframed watercolors, and angry at what fate has dealt her, Morgan is very nearly a juvenile delinquent. After vandalizing a fence with her paintings, called graffiti by authorities, Morgan is sentenced to community service. She must scrape her paintings off and repaint the fence.

Morgan and Elizabeth meet and the angry teenager and the nearly blind elderly woman form an unlikely bond. Morgan is mesmerized by three paintings owned by Elizabeth. “The artist’s used a style that’s distinctive . . . It’s simple, yet detailed at the same time.” Morgan recognizes the style as identical to the watercolors owned by her grandfather.

The paintings are not the only thing that Elizabeth owns that fascinates Morgan. There are also the logbooks. When the director of the care home catches Morgan in Elizabeth’s room where she is not supposed to be, Elizabeth says that the girl is deciphering the logbooks.

So begins a journey into the past, and the slow unveiling of the secret that explains why Elizabeth and Emily lived for over 50 years in a small villa in Tuscany away from the sound of the lapping waves of Lake Superior. “We were as happy as can be expected, the odd couple that we were, tucked away from the prying eyes of the world.”

The first logbook begins in 1917 and provides background about Andrew Livingstone, Scottish immigrant to Canada and keeper of the lighthouse on Porphyry Island, but Morgan sees that whatever Elizabeth wants to know is not found in the first logbook.

The other logbooks evoke memories of the endless routine of caring for the lighthouse, and the badly scarred WWI veteran who was Andrew Livingstone’s assistant until he disappeared one day.

The logbooks also remind Elizabeth of two odd and disturbing events that were never explained by her father. First is a lonely grave on a nearby island, whose simple marker bears Elizabeth’s name. Who is buried there under her name?

Beautiful silent Emily who never spoke, shied away from strangers, never learned to read or write, who examined obsessively the plants and insects of Porphryr Island and drew or painted them in simple lines and brilliant colors; Emily who lived in a world of dreams.

But there are other questions that are answered in unexpected ways. The night that Elizabeth hears Morgan play the violin, and sees the sketches hidden in the violin case, sketches drawn by Emily in 1943, that Elizabeth knows that her story, her past, is also Morgan’s past.

The Lightkeeper’s Daughters by Jean E. Pendziwol is a remarkable achievement in several respects. Where so many authors feel so strongly that they must include all their research that it often results in indigestible clumps of verbiage skipped over by readers, Pendziwol skillfully integrates details about the routine of operating a lighthouse into her account of the Livingstone family, so the reader absorbs a great deal of specific knowledge without being aware.

Pendziwol’s descriptive narrative creates a detailed mental image of Porphryr Island without losing her readers in overwrought prose, while the unexpected twist at the end is one that any mystery writer would envy.

The Lightkeeper’s Daughters is a story of commitment, identity, and familial loyalty that will leave one in tears. Five out of five stars.