The Lighthouse Keeper's Daughter: A Novel 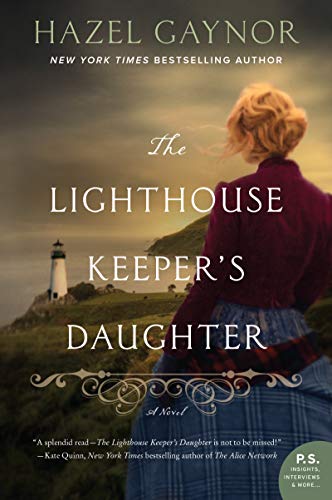 The Lighthouse Keeper’s Daughter by Hazel Gaynor is a journey into the past . . . and then again, further into the past.

The story begins with Mathilda Emmerson, 19, pregnant, and unmarried, setting sail from Ireland to America in 1938. A disgrace to her family, she is sent to have her baby in America, give it up, and then return. Among her few possessions is a book Instructions to Light Keepers, which has been handed down through the family, with directions on how to take care of a lighthouse. The value of which she questions.

Switch gears, and Gaynor takes the reader back to 1838, to Longstone Lighthouse, Northumberland, England, where Grace Darling, 22, has lived her entire life with her family. She has learned about the lighthouse and treasures her time helping her father care for the structure.

In her mind is the light memory of George Emmerson, a young Scotsman she met whose memory she cannot let go of, regardless of how hard she tries.

Enter Sarah Dawson, a young widow with two small children, on a voyage to visit her brother in Scotland. As the skies darken, the seas become rough, and the ensuing storm destroys the boat Sarah and her children are on.

As Grace and her father, William, watch the horror unfold before them, they know that it is now their responsibility to go into the storm and see if they can save anyone from the floundering ship.

Sarah’s children do not survive, but Grace and William weather the storm and save the few survivors, including Sarah. Days after the event, when the survivors have recovered and left the lighthouse, it does not take long for Grace’s role in the rescue to make its way to the world. And life changes at the lighthouse.

The quiet life that Grace knew and flourished in quickly changes to one of tourists and fans asking for a lock of hair or a piece of her dress. Tourist boats clamor to the lighthouse seeking even a peek at the woman who did a man’s job.

In the meantime, forward to 1938 and Mathilda has arrived in Rhode Island where she will stay with a distant relative, Harriet Flaherty, until the baby arrives. Harriet is cold and unfriendly, but has her duty to do, and so she takes Mathilda into her home. Much to Mathilda’s surprise, she discovers that Harriet is a lighthouse keeper. And so, an uncomfortable relationship develops, with secrets untold.

Back in 1838, Grace is coming to terms with her celebrity as best she can, when she discovers that Sarah Dawson, the woman she rescued, is, in fact, the sister of George Emmerson. And he has not forgotten his chance meeting with Grace Darling months earlier. He travels to Longstone Light to thank Grace for her efforts on behalf of his sister, and the feelings between the two are rekindled.

But a romance that is not to be, as George is engaged to another, and Grace would never think of intruding on that sacred relationship.

Forward to 1938, where Mathilda’s relationship with Harriet begins to thaw, and soon there are family secrets that rise to the surface. Mathilda learns that Harriet lost a daughter several years earlier to drowning and it is a loss that weighs heavily on her. In the family history, Mathilda is the great-great-grandaughter of Sarah, the woman who was rescued in 1838 by Grace Darling.

In 1840, George Emmerson is married, his wife becomes pregnant, and loses her life in the delivery process. Within days, the baby also succumbs, and George is left alone.

In 1938, Mathilda experiences childbirth, and soon learns another family secret . . . but at the expense of another death.

Gaynor has woven a good story here, as she travels backward and forward in time to connect these women’s lives. Her command of the language is excellent, her ability to put the reader right in the story—experiencing the tragedies and the joys—along with the characters, is well done.

If there is anything that draws one away, it is her use of three first-person points of view as well as two third person POVs. It is often confusing and difficult to determine who’s mind we are in. In spite of the fact that first-person POV is extremely emotional and puts the reader right into the mind of the character, this story would have been well done in all third person, thus avoiding a degree of confusion.

Having said that, the story is well laid out, all of the clues are tied up at the end of the story, and it is a satisfactory read. Some surprises in the family history are a pleasing end to the story.