The Light of the World: A Memoir 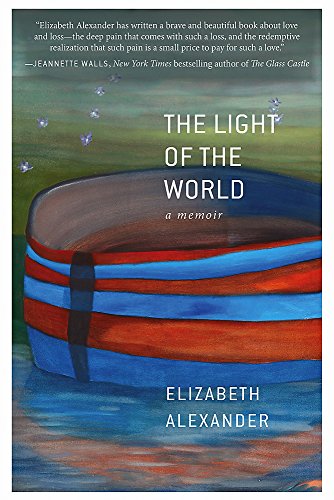 “crushing, lovely, painful, and above all powerful.”

“I wake up grateful, for life is a gift.”
—Ficre Ghebreyesus

Simple, wise words from a man whose very name, translated from his native Eritrean, means “love.”

Just before Easter in 2012, acclaimed poet, Elizabeth Alexander lost her beloved husband Ficre. An artist, chef, poet, father, and lifetime explorer, the loss of Mr. Ghebreysus was both unexpected and tragic. In The Light of the World, Alexander recounts scenes from the year after his death as well as scenes from his past in war torn Eritrea and sections of their entwined lives.

The story is gripping from the very beginning: “The story seems to begin with a catastrophe but in fact began earlier and is not a tragedy but rather a love story.” And it is a love story that Ms. Alexander recounts.

Though written in prose, it is a poet’s sensibility that shapes her story. The reader sees Ficre through her loving eyes: he is a lover and a thinker, a wise friend and gentle father, a do-er in a world of watchers. His loss is unthinkable.

And so her memoir is structured thusly: After a lovely first chapter that lays out the boundaries of the story by referencing incidents in Ficre’s life from birth through his death, the narrative meanders from anecdote to anecdote; a chapter dealing with the day before his death might coincide with one about his birth, or his art, or his restaurant. Maybe it’s a story about their magical meeting aside a recipe for Shrimp Barka, or a humorous anecdote about Alexander’s childhood mere lines from a memory of her own child’s sorrow at the loss of his father. Anyone who has suffered a great loss will empathize with this chain of thought (though “train of thought” implies more direction than a sorrowful mind is capable of).

As the story progresses and the Alexanders begin to find their “new normal” without their bedrock, the connections between the stories and the chapters become more obvious. That very structure is a brilliant illustration of the effect and power of loss on the human mind.

The language is rich and evocative, fitting for the love story of a poet and an artist. Alexander paints with words, making visible to the reader the cool melons and papayas, the ceruleans and cyans, Ficre loved of his African home. They fall in love, dance at weddings, make coffee, plant gardens, and talk, deeply and honestly, about everything under the sun, and Alexander takes the reader along.

She documents the rhythms of their lives through the screen of absolute devotion; in refusing to paint the dark places that every marriage harbors, she makes a powerful statement about faithful love and where loss fits into that picture. “Perhaps,” she says, “tragedies are only tragedies in the presence of love, which confers meaning to loss. Loss is not felt in the absence of love.”

The Light of the World is crushing, lovely, painful, and above all powerful.  It is difficult to believe that anyone who has suffered loss will remain unaffected by this marvelous book.

Alexander honors her husband and her love, while documenting her own keening, wailing loss without flinching, giving tacit permission in our stoic, naval-gazing world to accept both love and pain as part of life. “He was a bottomless boat and the boat that would always hold me,” she says, and in the end she leaves the reader with no choice but to agree.