A Light in the Dark: A History of Movie Directors 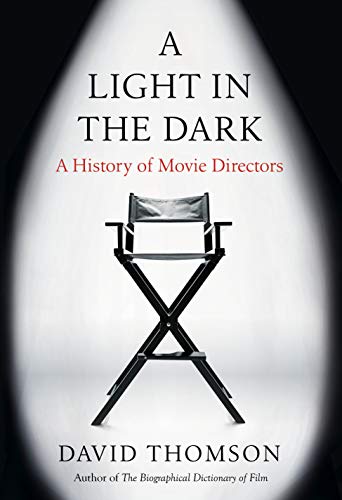 A Light in the Dark by veteran film scholar and critic David Thompson is not so much a comprehensive history of film directors—that would take a much larger volume than this—as it is a series of impressionistic chapters on directors Thompson particularly admires or, as in the case of Quentin Tarantino or Martin Scorcese, finds problematic. Like much of Thompson’s work, it is a chatty book, written in a breezy style, filled with opinions but short on argument and analysis.

For the most part, the book is comprised of brief chapters on a selective group of celebrated directors from D. W. Griffith and Erich von Stroheim to Quentin Tarantino. The chapters offer thumbnail surveys of the auteur’s life and major work. Fuller surveys can be found elsewhere. Most serious devotees of film know the facts Thompson offers and have seen the movies he mentions. This is a popular book, not an academic study, so nothing is documented.

In essence, Thompson has created a highly personal pantheon of “Great Directors,” just as earlier critics like Pauline Kael and arch-auteurist Andrew Sarris did half of a century ago. Such pantheons are always controversial. Does workmanlike Stephen Frears really belong in a list of great directors? Perhaps Thompson, a Londoner, felt he had to include a fellow countryman and, since he doesn’t like David Lean’s work, settled on Frears.

There’s a chapter on Hitchcock, of course, but that focuses mostly on his American work. Does Nicholas Ray, whom Thompson admits made a lot of bad movies, belong among the greats? He seems to be there because Thompson finds him an interesting personality, and personality seems as important to Thompson as the body of work. Like everything else about the book, Thompson’s list is subjective and a bit eccentric.

Thompson does include a chapter on female directors and one on African American directors but seems to be doing this out of political correctness, as the very nature of those chapters (more lists than analyses), suggests that Thompson doesn’t think that there is a female or Black director who deserves a complete chapter. Not even Spike Lee? He shows no interest in the many fine directors working in Asia right now and past masters Akira Kurosawa and Santayajit Ray only get brief mention

Thompson’s readers will be drawn to the book for his very personal takes on the directors as larger-than-life personalities. His strongest chapter may be the one on Howard Hawks. Thompson mentions how important Hawks’ Red River was to him as a movie-loving child in postwar London, and he devotes more space to that film than just about any other in the book. The saga of herding hundreds of cattle hundreds of miles from Texas to the rail depot in Kansas with its Oedipal struggle between John Wayne’s Tom Dunson and his stepson Matthew Garth played by Montgomery Clift resonates as a particularly American saga.

Yet Thompson does not mention the other master of the western, John Ford. Ford was nowhere near as versatile as Hawks, who was also a master of film noir and screwball comedy and even made one good musical (Gentlemen Prefer Blondes), but Ford is one of the most celebrated American directors with a far more important body of work than Orson Welles, who made one great movie. But how could Thompson, with his fascination for directors’ personalities, not spend a chapter on the grandly self-destructive Welles.

Thompson’s European choices are the usual suspects: Fritz Lang, Jean Renoir, Luis Buñuel, and Jean Luc Godard. They don’t seem to inspire the same enthusiasm in Thompson as the Americans. In his many passing mentions of Ingmar Bergman, Thompson exhibits such a dislike of the man that he can’t include him in his pantheon. If a director is going to be a monster, he has to be an enjoyable monster like Welles or Hawks.

A Light in the Dark is entertaining but not particularly enlightening, heavy on gossip but light on serious argument. It has little value for anyone who is a serious devotee of film.