The Light After the War: A Novel 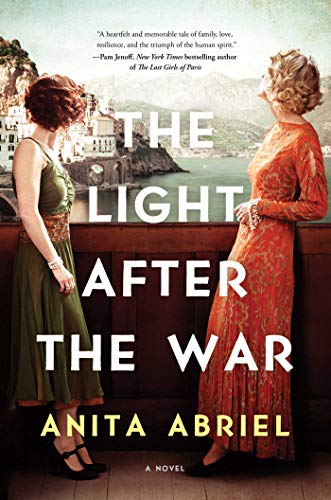 “this novel is definitely a page-turner.”

In a recent and largely disparaging New York Times review of the children’s graphic novel White Bird, novelist Boris Fishman questioned whether quality literature is “a luxury” that the Holocaust canon can’t afford to insist on, “when there are American educators who don’t believe the Holocaust happened.”

By that standard, is there room on Holocaust library shelves for a book like The Light After the War, which is basically a romance novel that uses the Holocaust as a dramatic backstory to sweep its beautiful young heroine, Vera Frankel, from the Budapest ghetto to struggling postwar Naples to upper-class Caracas to booming Sydney?

Vera and her best friend, Edith Ban, grow up in well-off Jewish families in Budapest dreaming of being a playwright (Vera) and a fashion designer (Edith). They survive World War II through the kind of lucky break that constantly propels the narrative: Their mothers manage to shove them out the door of their cattle car en route to Auschwitz by tricking a Nazi guard. On the ground, the two 17-year-olds conveniently find a sympathetic Austrian farmwife who shelters them for the next two years, despite her husband’s reluctance.

An American captain in the Army of Occupation comes into the bakery where the spunky yet virginal Vera is working, in a village near the farm. Impressed with her excellent English, he agrees to look for her parents, since he is headed to Budapest. When he learns that her mother is dead, the captain offers Vera the only consolation he can: a letter of recommendation to his friend Captain Anton Wight, who heads the U.S. embassy in Naples.

Anton is a romance-novel dreamboat: tall, wealthy, and square-jawed, with pristine white teeth, “serious pale blue eyes,” and hair that “was golden in the sunlight that streamed through the window.” He loves classical music and is deeply disturbed by the destruction wreaked by the war.

Although Anton and Vera meet on page three, it will take nearly 300 pages of overly high-minded scruples, unbelievable obtuseness, tight-waisted frocks, and more lucky coincidences—plus a hot-blooded Latin lover with “liquid brown” eyes—before they inevitably reunite. (This is not a spoiler alert; in a romance novel, of course the lovers reunite.)

Author Anita Abriel says the book was “inspired by” the story of how her mother and a friend survived the Holocaust, particularly the escape from the cattle car. Vera and Edith are named for Abriel’s mother and her friend.

For all its clichés of language and characterization, this novel is definitely a page-turner. As well, the far-flung settings provide an interesting change from the usual Holocaust locales of Poland, France, and Germany. When Vera is hired as a copywriter at the J. Walter Thompson ad agency, Abriel richly conveys the era’s restrictions on working women. And Vera’s brief recollections of the growing anti-Semitism in Hungary, along with her survivor’s guilt, are certainly a real part of the Holocaust story.

But does such a combination deserve to be added to a Holocaust reading list?

Yes—and today more than ever. It takes a diversity of voices to tell all the stories of the Holocaust. Indeed, maybe counterintuitive books like The Light After the War are actually more valuable than the classics if they make a whole new readership aware of the horrors of the Nazi terror and ethnic hatred.

As one survivor points out in this novel, in explaining why she wears diamond earrings and a mink stole at dinner every night on an ocean liner to Caracas, even though her entire family was wiped out, “Would they be any less dead if I stayed in my cabin and cried?”

It’s okay to read about diamond-wearing socialites in a book about the Holocaust and even to wear diamonds while doing so. The important thing is the reading.