Life of David Hockney: A Novel 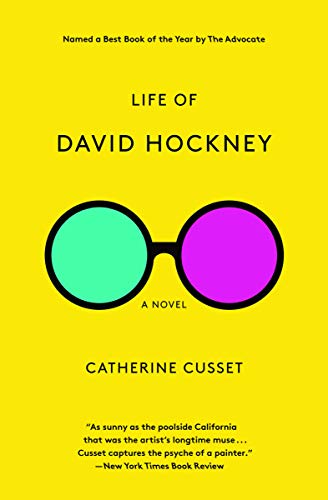 “Hockney’s creative output had taken a marked turn. Working in three dimensions changed his relationship to space. It enhanced his vision further the way his deafness had . . . He experimented constantly what it means to see.”

For readers who know anything about David Hockney (1937–) this book is a gem. For those who don’t, there is much to delight here, too. The opening line echoes the subtitle: “This is a novel.” It is a hybrid of biography and novelistic chiaroscuro in which Catherine Cusset, a widely translated French novelist, tells us “I have imagined feelings, thoughts, and dialogue.”

The book moves along at a brisk pace, yet never resorts to mere chronicling. A scarcity of paper after the war was a problem for a boy who like to draw as much as Hockney did. He received a scholarship to the premiere school in the city and was well liked. Only 18 years old when he had his first exhibition in Leeds of Yorkshire artists, he was offered an interview at the Royal College of Art in London, which took only 1 in 10 students. He was accepted despite what he assumed to be “his ignorance and inferiority compared to rival candidates.”

In time his paintings would sell for astronomical prices, and Hockney would become rich. “But the fortune served only to provide a certain comfort and did not deliver what was essential, which was the desire to paint. Happiness came from working.” And what an astonishing work ethic lay behind his prolific output—sometimes a dozen or more canvasses done in a day.

He wasn’t drawn to the modern art of the time, but rather to figurative subjects that mattered, and once he became aware of his homosexuality he wanted to put his “burning desire” into his pictures. Arriving in New York: “There are so many gay bars! And so many vegetarian restaurants!” He and two friends were captivated by Lady Clairol’s tagline, “Is it true blondes have more fun?” That afternoon the three became bright peroxide blondes. Hockney had transformed himself into a blond like the models he had ogled in Physique Pictorial. “He was his own creation,” reborn.

Life in America was generous. Although still a student back in England, he found that MOMA in New York was buying his etchings. The ease with which Americans sold themselves made an impression, too. But talent rather than promotion was more responsible for David’s success. For a teaching job in Iowa city in 1964, he bought a pair of thick black spectacles to make himself look older and more professorial. He needn’t have bothered: Everyone was “smitten with his English accent,” which back home betrayed his provincial working-class background. Five years later, at the age of 32, he had his first retrospective at Whitechapel Gallery in London where he saw “for the first time in 10 years works from his youth that he had sold.”

Serendipity graced his youth. He got a Los Angeles driver’s license in one day “almost by accident,” having never driven a car before in his life. He took to the roads with relish. The landscape was immense, the light brilliant, and the ocean vast. Swimming pools in Los Angeles weren’t a status symbol, he realized, merely a place to cool off and “an excellent place to pick up men.”

The roots of his Hollywood attraction stretched back to Hockney’s childhood, when his painterly eye was already noticing details that escaped others. Disclosure: I visited Hockey in 1981 to study his synesthesia and have written about it in Wednesday is Indigo Blue. He told me one afternoon how his father loved Laurel and Hardy. Watching with him in a dark and chilly Yorkshire cinema, Hockney thought to himself, I bet it’s warm and sunny in Hollywood. The shadows on the screen are so sharp.

If his eyes were sharp, his hearing began to fade—down 25 percent before he reached 40. Eventually he’d be completely deaf like his father. When the audiologist recommended wearing only one hearing aid as being more discrete, David insisted on being fitted with two, painting one bright red and the other bright blue. He wasn’t going to hide his hearing loss any more than he would being gay.

Deafness sharpened his visual perception. His newly unused auditory cortex let him take in more and more detail. He had painted opera sets twice before in Europe. But his first commission in America was at the Metropolitan Opera for a triptych of French works. Opera sets were the first time Hockey had painted anything to music. Thanks to his colored–hearing synesthesia, the music itself dictated the colors and shapes he painted.

Hockney’s creative output had taken a marked turn. Working in three dimensions changed his relationship to space. It enhanced his vision further the way his deafness had.

Hockney’s subsequent invention of reverse perspective didn’t rely on a 15th century spatial vanishing point but were instead “journeys through time.” It more accurately depicted what the eye actually does as a person moves about. More importantly, the hyper-realistic space of many perspectives opens up the viewer’s imagination. Groupings of two dozen or more Polaroid snapshots “let the viewer move around from room to room, through space and time, unlike a regular photo that would have fixed only one moment in time and space.” Hockley called his new technique “painting with a camera.”

He experimented constantly with what it means to see. When PCs became available, Hockney begin drawing with a digital stylus, “painting with light.” Then came art via the fax machine, the photocopier, the camera, the iPad, and finally prisms (the subject of his controversial Secret Knowledge: Rediscovering the Lost Techniques of the Old Masters).

Catherine Cusset’s imaginative novel captures the journey through time of Hockney’s life, never a straight line but a repetition of cycles, “everything occurring in alternation.”