Life in the Folds 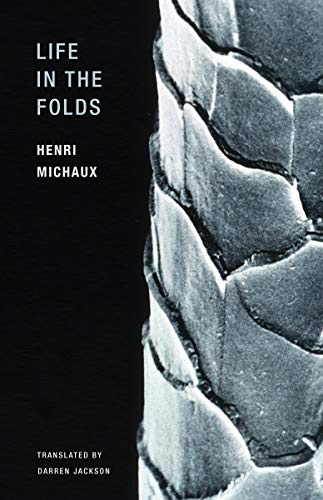 The double traumas of war and death loom large over Henri Michaux’s Life in the Folds. Published in 1949, this slim volume is, as translator Darren Jackson writes, “His assault on reality [that] begins with the conception of self as singular and often involves images of surgery, torture, or combat.” The aggressiveness and ironic misdirection reveal the anguish Mr. Michaux endured as he dealt with the aftermath of the Second World War and the death of his wife in 1948.

Mr. Michaux’s work, here translated by Darren Jackson, remains a unique addition to the postwar French literary avant-garde. Life in the Folds is a strange amalgamation of genres and styles. Included are fragmentary prose pieces, short poems, a fictional anthropological record, and a piece veering towards autobiography.

As with the end of the First World War, the aftermath of the Second World War had writers deal with the global trauma and massive destruction with works of formal experimentation. In French literature, there is Samuel Beckett’s literature of subtraction, beginning with Molloy in 1951. Jean Genet wrote The Miracle of the Rose in 1946 and Funeral Rites in 1949, novels filled with ritualized eroticism and violence. After the Second World War, Louis-Ferdinand Céline’s prose became more fragmentary and manic, including Guignol’s Band in 1944.

Michaux’s work is filled with violence, surgery, and torture. The nearest parallel may be the works of the Marquis de Sade. But unlike Sade’s works with their massive egoism and ferocious desire to shock, Life in the Folds feels uncomfortably impersonal. If Sade’s writing is a kind of depraved self-affirmation, Michaux’s writing operates like a desperate attempt at self-annihilation. He wants to get out of his own skin in this piece of literary suicide. In the text, he is both victim and victimizer. The violence he indulges in and endures leaves him numb and resigned. Unable to escape these torturous systems, he becomes resigned. Sade operated on volcanic anger, whereas a deep despair permeates Michaux’s writing.

In “Satisfied Desires,” he writes about how “We never achieve what we want in life. If by some happy murder you do away with your five enemies, they’ll still make problems for you. And that takes the cake, coming from dead men whose death we had taken such trouble over.” Meanwhile his poetry uses anaphora to push forward a verbal attack. In “Full of” he writes:

Full of unlimited folds, the folds of my lookout.

Full of shards, of debris, of heaps of debris.

Of cries as well, especially cries.

The poem is minimal and suffocating, at once shamanistic with its chant-like repetition and simultaneously undercutting the use of spells to positively change the situation.  Reading Henri Michaux is similar to pushing through the dark despairing essays of Emil Cioran. Michaux uses poetry and prose to negotiate with what seems like an inescapable grief. The ironic misdirection he used in his prose pieces also comes to the fore in “Portrait of the Meidosems.” It reads like a surrealist anthropological journal, recording the lives of the Meidosems. Closer to science fiction, yet also anticipating Samuel Beckett’s similar work from 1970, “The Lost Ones.”

Life in the Folds ends with “Indescribable Places” and “Old Age of Pollagoras,” the former pre-figuring Italo Calvino’s Invisible Cities and the latter the only time Michaux ventures close to an autobiographical piece. All these various writings taken together make Life in the Folds a masterpiece of concision and pain. It is a literary achievement that can stand with the best works of Samuel Beckett, Jean Genet, and Louis-Ferdinand Céline.

Henri Michaux is a titan of French postwar modernism.