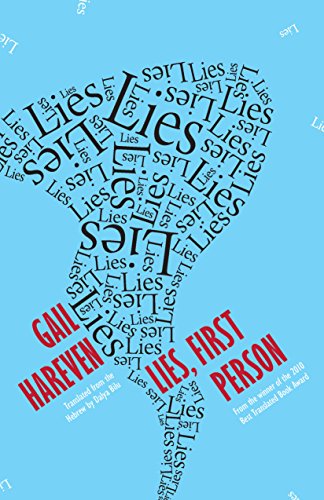 There are books that make us feel intensely and others that make us think deeply; one that does both is Gail Hareven’s opalescent and psychologically complex eleventh novel Lies, First Person (in the original Hebrew Hashkarim Ha’aharonim Shel Hagoof which literally translates as The Body’s Last Lies), which is only the second (The Confessions of Noa Weber) of her 13 books for adults to be published in English in Dalya Bilu’s fine translation. But the titles and languages might not be the only difference between the two editions.

Hebrew is a much more concise language than English, yet the two editions have the same page count. Does the Hebrew edition have a smaller font? Is the English edition abridged, and if so, what was cut? Readers and critics want to know.

The novel addresses themes of rape, incest, vengeance, guilt, and the nature of evil via sometimes lyrical interior monologue and a cast of characters who are Holocaust refugees and the second generation. In a prologue to the narrative, Elinor Brandeis, the first person narrator, cautions us, “You should never believe writers, even when they pretend to be telling the truth,” and on the advice of her lawyer husband Oded, provides a disclaimer insisting that this is a work of “pure fiction,” that none of the characters, herself included, are real.

Elinor’s father and uncle, Shaya and Aaron Gotthelf (German for God speed) were separated in childhood when their parents received exit visas from Nazi Germany to different countries: Aaron grew up in New York and became a famous and controversial writer and academic whose pet theory is that the writings of the Marquis de Sade comprise a prophetic blueprint for 20th century totalitarianism.

Shaya grew up in Palestine/Israel where he and his wife Erica became the pretentious pseudo-intellectual owners and proprietors of a small boutique hotel in Jerusalem’s Beit Hakerem neighborhood and parents to Elisheva (older, blond, and learning disabled) and Elinor (younger, brunette, and academically gifted).

Elinor, seeking to remove herself from her family of origin at as early an age as possible, attends high school at a boarding school in a different neighborhood in Jerusalem. That is why she is absent when her Uncle Aaron, visiting as a guest in the hotel, repeatedly rapes and humiliates Elisheva in the manner of de Sade (including using her as a piece of furniture) and where he writes a novel in the first person voice of Adolf Hitler entitled Hitler, First Person which recounts the rise and fall of the Third Reich from the Führer’s point of view, a book that is widely condemned and leads to an unsuccessful assassination attempt against its author by a Holocaust survivor back in America.

When Elisheva becomes pregnant Aaron arranges an abortion. Accompanied by a psychologist Elisheva tells the family about the rape and abortion, but her parents insist that Elisheva imagined it all until Elinor, who never doubts her sister, impersonates Elisheva to retrieve the file from the gynecologist’s office and faced with this evidence Shaya and Erica accept the truth.

The rape not only traumatizes Elisheva, it also destroys the family: Erica, who has always been a narcissistic hypochondriac, starts taking heart medication that destroys her healthy heart in what Elinor considers a suicide; Shaya falls in love with an Italian hotel guest and moves to Italy to marry her after selling the hotel and buying a three room basement apartment in Talpiot (a less affluent Jerusalem neighborhood) where Elinor must care for Elisheva.

As the sole caretaker of a dependent sibling Elinor is exempted from army service, a rite of passage she had looked forward to, and enrolls as an undergraduate at Hebrew University where she meets Oded. When Elisheva has a breakdown, Elinor has her sister committed to a mental hospital where she falls in love with an American Evangelical patient who she marries and with whom she moves to America, converts to Christianity; both newlyweds fully recover from their mental illnesses.

Decades later Elinor and Oded are parents to two adult sons who are working and studying in America. Elinor writes a popular newspaper column in the voice of a fictional naive little girl she names Alice who is an awe-struck tourist in her own hometown, and Oded is a successful attorney.

One autumn Elinor receives a phone call from Aaron Gotthelf—who will be giving a talk renouncing his novel as a panelist at an academic conference in Jerusalem where his newly Orthodox son will be getting married the next summer—who asks to meet and speak to her. Elinor decides she must travel to rural Illinois to warn Elisheva in person that her rapist has tried to reconnect with the family.

In the novel’s first chapter Elinor compares her family and writing life before Aaron contacts her to the biblical Garden of Eden; thereafter she refers to Aaron as a serpent, the Not-man, Hitler, and the First Person, in other words as ultimate evil which in turn hints at a philosophical consideration of the nature of evil not unlike some of the chapters in Ron Rosenbaum’s recently updated 1998 book Explaining Hitler. In a recent interview with The Daily Beast Rosenbaum reaches the conclusion that there are no evil people, only evil deeds.

When the sisters meet it turns out that Elisheva has decided to forgive Aaron so she can heal and get on with her life, but for an incredulous and vengeful Elinor, Aaron becomes a singleminded obsession. Preoccupied with thoughts of retribution, Elinor is emotionally distant toward her sons during the second part of her and Oded’s American trip. She ceases marital relations and stops writing her Alice column while she mulls over Aaron’s invitation.

Hareven risks resorting to stereotypes by repeatedly pairing characters with opposing traits: the jaded adult Elinor, and her fictional pig-tail wearing juvenile creation who shares the name of the pedophile Lewis Carroll’s protagonist and is in a perpetual state of wonder; the naive, simple minded, emotionally healthy, forgiving and devoutly Christian Elisheva, and the worldly, emotionally complex and obsessive, vengeful secular Jew Elinor; the steadfast, “salt of the earth,” intelligent but not intellectual Oded, and Aaron who rationalizes and intellectualizes evil.

At the risk of revealing spoilers, other reservations about this beautifully written and powerful book include: its seeming endorsement of taking the law into one’s own hands, though some readers may view Elinor as a feminist heroine for her willingness to act outside a legal system that protects a rapist; the notion that Oded would risk disbarment and worse to become his wife’s criminal accomplice seems like a female fantasy; and other details that will not be revealed here don’t add up and insult the professional competence of Israel’s police. But in the novel’s prologue Elinor already warned us “nothing happened at all.”

Kudos to university press Open Letter Books for bringing us this multifaceted book that rewards rereading.