Licensed to Kill: Hired Guns in the War on Terror 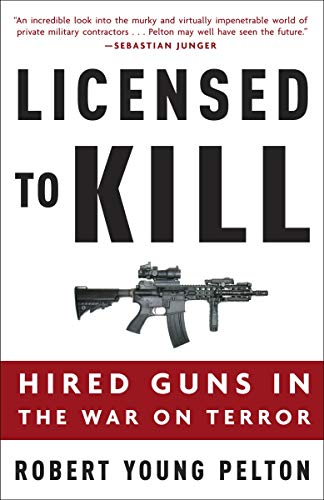 “Mr. Pelton has sharpened his pen and plugged into individual contractor units to bring us this candid take on the behind-the-scenes players in warfare.”

Licensed to Kill by Robert Pelton peels back the veneer of civility on how the United States has been financing the wars in Iraq and Afghanistan through first-hand observations of private military contractors. Mr. Pelton, the author of the World’s Most Dangerous Places series, is known for his candid onsite reporting of world affairs in far-flung locales.

He reports on the gritty mélange of paramilitary, mercenary, CIA contractors, and private military contractors who do the “dirty work” for various governments and private corporations, but not without cost. Mr. Pelton reveals various private sector contractors who operate under the cost-plus-a-guaranteed-percentage for their military contracts and are not subject to public disclosure due to “security reasons.” Gee, that sounds a bit like having your hand in my wallet with a gun to my head. But then again we are talking about lots of money and guns, and nobody is better at revealing these murky transactions than Mr. Pelton.

The most notable of these transgressors is the founder of a paramilitary contracting firm, which staged a military coup for control of valuable mines in Equatorial Guinea and still seethes in an African jail. Mr. Pelton travels the globe to examine the phenomenon of outsourcing military and security services by various governments.

Finance is not the only issue and if I may quote Mr. Pelton, “Private security has no ideology, no homeland, and no flag. There is no God and no country. There is only the paycheck. If a contractor dies in service his employer sends a final one, often calculated to the hour of his death, along with a cardboard box of his personal effects. Beyond that, neither the contractor’s employer nor the U.S. government has any legal responsibility to the surviving family members.”

Mr. Pelton builds a compelling case that the real “advantage” in using private contractors is for governments to remove a level of accountability for actions that would bring greater scrutiny if those services were part of the national armed services.

Even if you are not a world affairs and political intrigue addict, there are enough guns and remote skirmishes in this book to entertain, as evidenced by my high-school age son who avidly devoured the book and regaled me with stories.

Licensed to Kill does indeed have some killing in it, but it is more—by far—a treatise on the secretive world of paramilitary operators and their far-reaching tentacles. Mr. Pelton has sharpened his pen and plugged into individual contractor units to bring us this candid take on the behind-the-scenes players in warfare.