The Library of the Unwritten (A Novel from Hell's Library) 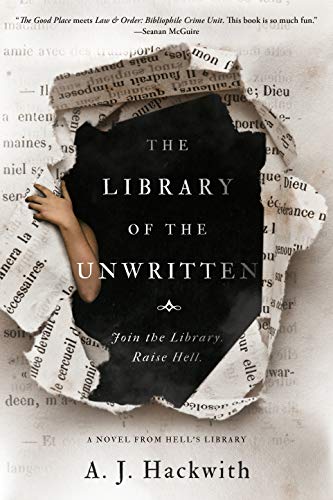 "‘Books have songs, songs have stories, and then there are humans at the heart of the jumbled mess.’"

Fasten your seat belts. Hang onto your hats. You are about to embark on a perilous adventure to the Library of the Unwritten. Meet Claire, Head Librarian; Brevity, former muse and Claire's assistant; Leto, a nervous teenager; and Ramiel and Uriel, two terrifying angels. You're invited to join the Library and Raise Hell.

There's a special place in hell for the unfinished books of the world. Claire is head librarian of hell's Unwritten Wing. Andras, a demon, is keeper of the Arcane Wing, holding all the artifacts. Both the Unwritten Wing and the Arcane Wing form a united front to keep the books from being destroyed. "These are unwritten books. Pure potential . . . imagination. The power to create."

Just as regular libraries on earth have interlibrary loans, this Library of the Unwritten has Inter World Loan, where requested books are sent to borrowers in other locations.

The restless characters in these unfinished books threaten to come to life, and Claire's job is to keep order and repair damaged books. "It is a story's natural ambition to wake up and start telling itself to the world . . . A librarian already failed if a book requires repairs . . . But true damage happens only when a book escapes."

The first book in this fantasy thriller series begins when a hero escapes from the library to seek his author. When Hero tries to write his story, the book shudders, and Claire kidnaps him and makes him part of Special Collections. "We think stories are contained things, but they're not . . . Humans, stories, tragedies, and wishes—everything leaves ripples in the world."

Ramiel, a Watcher and a fallen angel, wants to possess the pages of the Codex or Devil's Bible, and believes that Claire has it in a book in the library. He attacks Claire and Leto, who are injured. If not found, the Codex will cause a war between heaven and hell. The one who possesses it will have unlimited powers.

Claire, Brevity, Leto, and Hero decide to go on a quest to other realms to locate the Devil's Bible, not realizing the dangers and traps that await them. However, Claire has her tools to protect her, consisting of books, writing and book-binding materials; Leto has a ghost light; and Hero has his sword. Andras and his ravens lead the way to the realm of Valhalla, their first stop.

They run through walls and dark tunnels until they finally reach their destination. But when they try to enter Valhalla, Arlid, a menacing raven woman, grabs Claire and threatens to kill her. She states that they have to prove themselves in a dual in order to have access to Valhalla. Claire answers: "I am not a coward, but I am not a warrior either. I'm a librarian and a scholar—my only skill is with words."

The duel consists of words between Claire and Bjorn, a storyteller and former librarian. They each shout out a quote from a book and the other has to identify the name or the author. "A duel between librarians was a duel of words. Not just any quote from a poem or passage would do; it had to hold meaning for the audience." Meanwhile, Hero fights a giant with his sword and is wounded. His wounds spill out ink instead of blood. Claire and Hero win their battles and are allowed to enter Valhalla. Andras asks Claire to abandon her books if she wants to continue her search for the Codex. But Claire feels vulnerable without her tools and decides to send Brevity back to protect the library. "Books have songs, songs have stories, and then there are humans at the heart of the jumbled mess."

The raven deposits Brevity in the library. She considers running the library alone—a daunting task. "Each book a whipping, seeking coil of light when it was awake . . . Books desperately wanted to be written, and were constantly sending out tendrils hoping to catch and find purchase in a fertile mind." When the books were asleep, they were withdrawn and tucked within the shelves.

Claire, Leto, and Hero wind up on earth in the city of Mdina where they meet Andras again. He sends a guide who leads them to Beatrice, a librarian with whom Claire had once had a lesbian relationship. Claire killed her boss, Gregor, when he threatened to break up the relationship. "Stories never lived only in the ink." However, it was a trap. Ramiel and Uriel are waiting for them. A booming, ear-piercing howling disturbs the quiet. They're surrounded by Hellhounds with no way out.

Claire, Hero ,and Leto try to escape with the Hellhounds running after them. They encounter crocodiles in the water. Andras tries to take the Codex from Claire, but she had given it to Leto for safekeeping. She has to get back to the library. Ramiel fails to stop Claire, and Uriel's wrath is unforgiving. The suspense continues to build with surprises at every turn. The war between heaven and hell, good and evil, and between the Unwritten Wing and the Arcane Wing of the Library of the Unwritten is imminent.

This fantasy thriller deals with friendship, betrayal, love, hate, sacrifice, and reincarnation. The characters in hell must deal with family secrets, guilt, and forgiveness as humans must do so on earth. Each were sent to hell because of their sins on earth. The reader suspends disbelief when the dead protagonists are alive and when the Library of the Unwritten is today's regular library.

There are biblical references to Lucifer, also known as Satan; Uriel, the fourth Archangel (the others are Michael, Gabriel and Raphael); and Ramiel, a fallen angel who is mentioned in the Book of Enoch. Their roles in this book are similar to those described in the Bible. However, in this book, angels are evil and demons are good.

Is Hero a hero or a villain? Will he get back to the library and find his author? Is he a character from his story, an actual book, or a real person? Are the other figures dead or have they come out of their own books? Are they all reincarnated into living persons?

There are similarities to J. R. R. Tolkien's The Lord of the Rings, in which there's the quest for a ring which could bring destruction, the battle between good and evil forces, friendship and betrayal. It would have been helpful if the author had included some illustrations or a map of Claire's journey. Although, at times, the story becomes a little far-fetched, it's still a must read for fans of fantasy and science fiction thrillers.

"Here is how you make a sheet of parchment: Soak a pelt in a scouring bath until it softens. Scrape the hair clean. Treat the skin with astringent tannic acids. Rack and torture until tight.

“And here's how you make a story: Soak a life in mortality. Scrape the soul."
—Librarian Gregor Henry, 1899 CE