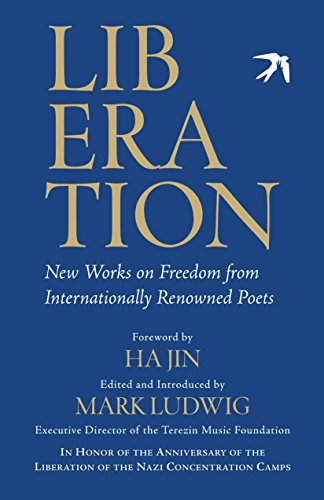 Boston Symphony Orchestra violist Mark Ludwig is founder of the Terezin Music Foundation, a collective of musicians and composers dedicated to freedom of expression in honor of those artists who perished in the Holocaust. To commemorate the liberation of prisoners from the Nazi camps, Ludwig invited over 60 poets from around the world to write about what freedom means to them. Liberation: New Works on Freedom from Internationally Renowned Poets is not only an important book in the pantheon of world literature; it is a profound j’accuse to every nation to fight crimes against humanity wherever they occur in the world.

Some of the pieces even serve as front line reportage from ignored regions of the world ravaged by war, poverty, disease, and political oppression. Challenging, intense, and hypnotizing in its poetic power that reflects real people reconciling humanity beyond the inhumanity impacting their lives.

These are works so much more than deft observance, clever meter, or forensic imagery. They provide powerful, thought-provoking imagery that reflects the need to find reason, sanit,y and reconciliation, if not peace, in the face of a relentlessly threatening world. They are voices that don’t shout, but conquer inhumanity with truth and critical analysis.

These poems have narrative drive and internal rhythms from disparate cultures and universal truths. In a sea of narcissistic poetry on the stage and in print, this work points to new directions with purpose and genuine artistry, stripped of literary conceits. These poets synthesize narrative and craft, not just listing thoughts, ranting, or obsessing.

The hypnotic, pulsing recitative of Yang Jian’s “Lament” in contemplating the true cost of senseless war.

Take the bodies of those who died kneeling on glass shards/Shattered shells, and broken stone, and place them on the altar.

And when I came back to the present/My country had lain empty for half a century/My country was Kwan-Yin, Confucius and Mencius, and I am empty Confucius . . .

Inga Gaile’s “Road” touching upon the need to connect to the those in crisis:

I am not a boy in Gaza who awakens from a shrill whistle/as he lies on a mattress in the school gym/ I am not.

I am not an explorer of outer space from Germany, so/beautiful, a true Aryan in these parts, only transvestites/are more beautiful.

Now I am drowning/In black water/Trying to remember his face./Has it been two nights?/In the dark, drifting by, flashes or orange/I pull a vest toward me/Near me, a man chooses to succumb/He stops treading, goes under/At dawn, nothing but ocean/Others leave me pieces of themselves . . .

In “Disconnected Parts” Robert Pinsky remembers victims of endless cycles of violent regimes and eras that vaporize into each other.

The first year at Guantanamo, Abdul Rahim Dost/Incised his Pashto poems into Styrofoam cups/“The Sangomos says in our Zulu culture de do not/Worship our ancestors: we consult them.”/

Becky is abandoned in 1902 and Rose dies giving/Birth in 1924 and Sylvia falls in 1951./Still falling still dying still abandoned in 2005/Still nothing finished among the descendants.

Myriam Moscona’s evocations of inestimable loss are unblinkingly conveyed in her poem “what it was”:

The rains and the rains/that brought the cold and the cold/that turned to ice and the ice/that brought disease and if dust is what it was/then these words/shall be no more . . .

Cuban-American poet laureate’s Richard Blanco’s lyricism in “Leaving Limerick in the Rain: A Letter to Ireland” evokes an émigré’s sense of being displaced.

Why should your home be home to me? My eyes Belong to another sea, my feet to another island-Cuba where the rain rains differently.

Those are just a few examples of the poetic richness, immediacy, and craft displayed in this collection.

As somber and as tragic are many of these poems, the poet's observations have a purpose beyond literary dramatization. These poets carry on their messages of equally profound hope and art in the service of freedom for all people.

The book coincides with composers scoring some of the poems for TMF concerts around the world over the next year. TMF’s (Terezin Music Foundation) mission statement: “By commissioning new works of composers and poets, TMF strives to fill the silence these great artists left and to use their legacy as a vehicle promoting dialogue and freedom of expression.” Liberation will stand as an enduring document of that mission.