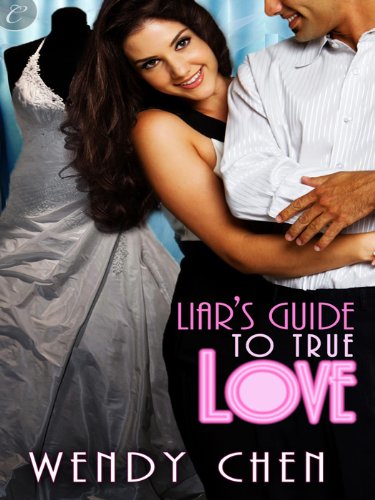 Upon starting this novel, I thought it was a parody of the chick lit formula:

Check, check, and check. (No gay boyfriend, but this novel is leading to sequels, so there’s room for expansion as the stories unfold.)

After about three chapters, it became clear that the author is not in fact being ironic about her chosen genre, but embracing it and all its tropes with an all-encompassing enthusiasm that is a force in itself.

Cassandra is a wedding planner in New York City. She loves her job, she has a great apartment (parentally sponsored), and she can boast of a great circle of friends. She’s single, but she’s okay with that because everything else is great.

Because she has a little problem with relationships—stemming from and echoing her tendency to tell nervous, perfectionist brides exactly what they want to hear—she’s let her agreeable nature bleed into her personal life. Her little (and sometimes not so little) white lies have never mattered much before because she’s only told them to guys that never last beyond a date or two. And she can kick the habit any time. Really.

But when it rains it pours, and Cassandra is suddenly swamped with romantic potential. Now she needs to choose between the man who broke her heart and is back on the scene and all grown up, or the new guy who seems perfect, but may not forgive the dishonesties Cassandra has perpetuated.

Cassandra starts off her relationship with Nick by lying about her job, and though given ample opportunity to fix up the miscommunication, fails to do so. Instead she chooses to construct even larger lies to cover up the initial untruth, all while sporting designer shoes, applying designer lipstick, carrying designer bags, and dressing brides in designer gowns.

There are also subplots involving Cassandra’s ex-boyfriend, her sister, her mother, and, of course, her requisite girlfriends all privy in varying levels to the main plot and Cassandra’s relationship-limiting problem.

In the end, it is the Wendy Chen’s enthusiasm that will carry readers through to the end of Liar’s Guide to True Love, and putting it down (or, indeed, offering a negative review) would only induce guilt on par with that of kicking a (female) puppy dog. Lightweight and somewhat predictable, Liar’s Guide to True Love is a book for the beach, perhaps, or a waiting room, or anywhere mindless bubblegum is not only desired but required.