Liars and Outliers: Enabling the Trust that Society Needs to Thrive 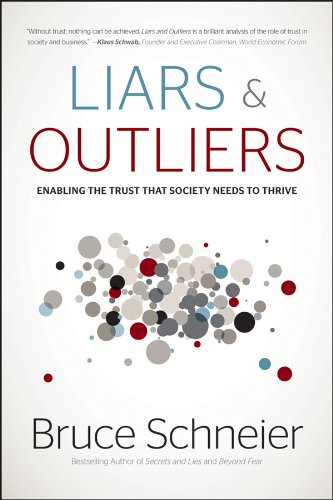 “. . . a reader may take fault with the conclusions in Liars and Outliers. As the evidence used to induce principles does not encompass the range of the examples provided, the conclusions are generalizations too open to be actionable. What passes for serious analysis produces only platitude, for example: ‘Laws don’t always have their intended effect.’ and ‘There are many ways that institutional pressure fails. There is too little or too much of it.’ Liars and Outliers is a fascinating but ultimately hopeless attempt to unify a hodgepodge of facts and factoids. The author, by choosing to not study his own biases, defects from science to serve up instead an offering of pseudo-science.”

Over the years an incredible amount of ink has been spilled on the concept of trust. What it is, why it’s important, how to achieve it, how to keep it, how to spread it around the Internet like margarine on toast. The difficulty in all this is trust is subjective. Trust is a human measure, inseparable from personal judgment, custom, culture, and law.

It takes a rare person who can present such a subjective issue with objectivity. In this, Bruce Schneier does not take the crucial first step: evaluating his own biases. Instead he starts on loose sand and immediately uses the word defector to label the breaking of trust. Defector is a subjective value-laden word. No one likes defectors except bad people. You read defector, and your mind closes.

The key purpose of objectivity is in keeping an open mind. An open mind raises questions while closed minds stop questioning. To point out problems with subjective words, here’s a simple game, “I am, you are, he is.” The first example is for the word defector: I follow my conscience, you are a defector, he is a traitor. And another example using defector’s opposite, loyal: I am loyal, you are an apparatchik, he is a slavish minion. Get it?

The author recognizes that subjectivity leads to a muddle as he notes that one can defect from one owns conscience by changing one’s mind, however he does not dig deeper to address inconsistencies that follow, and the author insists on using the word defector as if there were no other possibility.

There is barely any questioning of semantics, the meaning of words, or words’ relation to the world. (A reader curious on the topic of semantics is encouraged to read S. I. Hayakawa, Language in Thought and Action). And so as the author appears unconcerned by nuance or subtlety, this reviewer will point out several select nuances and subtleties that were missed.

Given the more objective definition of breaking trust in the preceding paragraph, one might want to pursue the meaning of “group” and the relationship between groups and individuals, and might want to define “rule” and the value of rules to individuals and to groups. And pursue more questions: whether or not a group has authority over, or responsibility to the individual (and vice versa). What is the nature of authority? Of groups over groups? Of individuals over individuals?

All these questions arise from being objective, from not shutting down questioning, and all have impact the understanding needed before warranting a strong label like “defector.” In Liars and Outliers, none of these questions are asked. Trust is over here and defectors over there, and that’s that.

Bruce Schneier identifies the following regulating pressures on trust: morals, reputation, institutions, and security. Though he does not use the exact words, he is creating an ontology, an organization into categories, and though he uses the phrase “pressures on trust” he uses the word “pressures” in a manner that suggests the more common phrase social regulation aka something that keeps society working smoothly, like laws.

Categorizing social regulation and is not an uncommon topic for study. See for example, “Toward an Ontology of Regulation,” by Feltovich, Bradshaw, Clancy, and Johnson, (ESAW’06 Proceedings of the 7th international conference on Engineering Societies in the Agents World VII, Springer-Verlag, Berlin, 2007).

The first trust regulator addressed in Liars and Outliers is morality. One of things that morality teaches us is to value truth above lies. Objectively “truth” and “lies” are labels for symbolic acts, judgments placed on (explicit, implied, or inferred) communication of a mind’s internal state. The label “lie” or “truth” may be taken on its face (by trust or good will) or by measuring the correspondence of the communication against evidence. Lying is the label applied to assertions where there is evidence to the contrary. A label that indicates neither truth nor lie but the limbo in-between is termed sincerity; hence Michael Moncur’s dictum, “I’ve heard that the secret of success is sincerity. Once you can fake that you’ve got it made.”

Reputation, institutions, and security like morals are trust regulators, labels subject to interpretation—which may or may not correspond with reality. The author, after examining each of these regulators (more heavily on reputation, more lightly on institutions) proceeds to create various models of trust (models of regulation), which given the lack of objectivity, tends to expose the biases of the modeler more than shed light on the objects being modeled.

In building models, the author tends to prefer risk-reward tradeoffs and reduce choice to economic utility. If one were looking for subtleties in looking an morals through the lens of economic utility one may discover a well-known dilemma, either accepting the morality of “the ends justifies the means,” or realizing that choice based solely on economic utility tends towards immorality. While the author does not notice that particular dilemma, he does admit that bias does exist in economic models, which does not stop him from providing examples thereof.

Models of human behavior are useful proxies for exploring societal dilemmas. Using a model of human behavior is certainly more ethical than putting humans in harm’s way just to see what happens. Models used for exploring human decision-making are often called “games” and the study of games, “game theory.” The limit of game theory is while there may be a range of choices in the real world, in game theory only the rules of the game are allowed.

When dilemmas are presented in game theory (dilemmas are problems where any choice is non-optimal to all players), the bias exhibited by the model is one of an either-or mindset, the false logic of the law of the excluded middle. Either this or that, like an eye correction test with limited lens choices. (A curious reader may Google “Kobayashi Maru” for a fictional portrayal of overcoming game theoretic limitations). The author does admit that models are not reality but this does not prevent him from modeling nor from leading the reader to inferences of models-are-reality.

Mr. Schneier goes on to explore the concept of competition, which he calls the Red Queen Effect from Alice in Wonderland. It was the Red Queen who said, “It takes all the running you can do, to keep in the same place.”

The Red Queen Effect is the label applied for example to the competition between media companies and file sharers, software virus creators and virus hunters, and the continuance of advancement in military technology despite mutually assured destruction.

This type of competition over who controls resources exhibits a competition-for-competition’s-sake mentality irrespective of what is being competed for. Note that when modeling competition a modeler is typically is limited to modeling “more of the same,” not modeling something new —as new requires new rules made up on-the-fly, something that game theory does not provide.

Mr. Schneier also touches on the concept of exceptions in the form of: “X is not X when defined to be Y.” For example, defection is not defection when it is acceptable to authority such as when it is labeled “whistle blowing.” The author certainly has the opportunity but again does not take it: asking the who, what, why, when and how of exceptions in general.

The model of writing Liars and Outliers itself appears to be based on a limited set of rules: Provide a wide range of interesting examples of a complex ill-defined phenomena; refer to expert opinion from a variety of sources; identify a limited set of parameters and controls; make models; note the deficiencies of said models; form vague general principles; change the topic and repeat.

Given this model a reader may take fault with the conclusions in Liars and Outliers. As the evidence used to induce principles does not encompass the range of the examples provided, the conclusions are generalizations too open to be actionable. What passes for serious analysis produces only platitude, for example: “Laws don’t always have their intended effect.” and “There are many ways that institutional pressure fails. There is too little or too much of it.”

Liars and Outliers is a fascinating but ultimately hopeless attempt to unify a hodgepodge of facts and factoids. The author, by choosing to not study his own biases, defects from science to serve up instead an offering of pseudo-science.