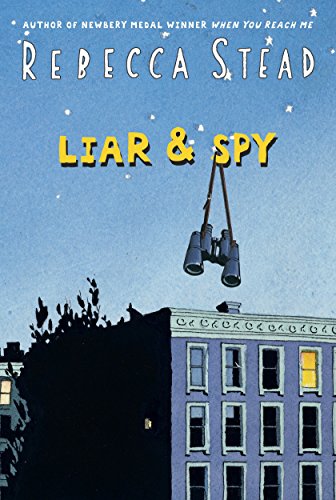 Rebecca Stead covers a lot of ground in her new middle grade mystery Liar and Spy.

Georges, a seventh grader, has several reasons to be troubled. The “s” that ends his name is silent, and that alone serves as fuel for bullies and discomfort for him. (His well-meaning parents loved Seurat, the French painter. Seurat’s first name was Georges. So that is that.)

Further, his father has lost his job; his mother, a nurse, works double shifts to support the family; and Georges misses his friends.

The family sells their home and moves into a Brooklyn apartment building. Georges misses that home’s fire escape where he loved to sit and think. In Ms. Stead’s skillful, writerly hands, this is a particularly poignant touch. Lonely, Georges soon becomes friends with Safer, a bright 12-year-old boy.

Rebecca Stead creates characters appropriate to her plot, and the boys’ friendship produces several thought provoking contrasts important to the plot. Advanced readers will probably ponder these issues, while younger children will simply enjoy the story. While the families of the two boys are portrayed as deeply different, readers will find relatable points in each.

Georges’ family is in a difficult situation: his father is sad and rather hapless. His mother works too hard, coming home only to sleep. Communication with Georges is by very brief notes made from Scrabble tiles left on a table. “GOOD NIGHT, COOKIE. LOVE ME.” Or “KOALAS LOVE TO SLEEP.” Worse, the situation is aggravated when his mother is later hospitalized.

Safer’s family is eccentric and artistic, and they welcome Georges’ visits. But both parents are nearly consumed by their work, usually letting Safer and his younger sister, Candy, freedom to do as they please. As a result, the children become quite independent.

A seventh grade reader might feel nervous about such an arrangement, while a ninth grader might relish it as ideal parenting. In Liar and Spy, Ms. Stead explores various childhood problems without pounding readers over the head or veering too far away from the plot.

The storyline features a mysterious Mr. X, who also lives in the apartment building. Liar and Spy presents elements of suspense with time (Will they get caught in Mr. X’s apartment?), fear (Is he a murderer?), and hope (The Spy Club will safely solve the problem.)

School life is portrayed mostly realistically. Dallas, the bully du jour, calls Georges “Gorgeous.” Where one sits at lunch is an important social indicator. Some teachers are honest, empathetic, and close to students, while others are like Mr. Landau, the science teacher, who is more concerned with his own projects, food tasting and “umami,” than with his students. His methods may advance the plot, but it is doubtful that real life students would be asked to put mysterious, ill-tasting, burning to the tongue samples of unknown elements in their mouths.

In Liar and Spy, Georges creates a clever rebellion against this assignment that will make student readers cheer. Happily, in this book, it is justice that is ultimately served.

One caveat to this positive review: the ending of the novel, while surprising, is apt to disappoint. It is not a “I woke up and found the whole thing was a dream” ending, yet it falls into the same category. Perhaps the ending would feel more satisfying if there was more foreshadowing. Problematically, it ties up events up too simply, too easily, with a sweep of one enlightening factor.

Ms. Stead writes a few pages at the end attempting to leave major characters in logical circumstances, but many young readers may feel disappointed, if not cheated by this tactic.

Overall, however, Liar and Spy is a worthwhile read with a positive message honoring time as the ultimate healer.

Sally D. Ketchum is the author of Super Student, Happy Kid and Bread Garden, a middle grade novel that teaches higher level thinking skills. A teacher with many honors, she has been a consultant to teachers and students in all grades, and has taught writing at two colleges.