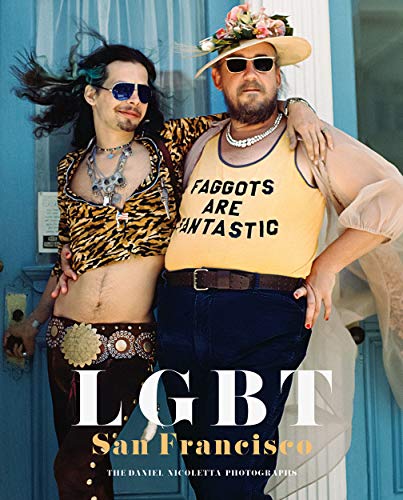 Daniel Nicoletta was studying photojournalism in the mid-70s, but was already getting work as a photographer for the Bay Area Reporter and The Advocate. His life and career took a new path when he went to work in Castro Camera and became Harvey Milk’s in house photographer when Milk was running his campaign to become the first openly gay member of San Francisco’s Board of Supervisors.

For four decades, Nicoletta chronicled the people, culture, and events in America’s gay mecca, an epicenter of a civil-rights movement. The scope of Nicoletta’s achievement is captured in Reel Art Press’ collection LGBT San Francisco: Daniel Nicoletta and the collection is a broad sampling of stirring images of diversity, unity, and the legendary atmosphere of liberated gay life.

This affordable and well-designed oversized volume has over 300 black and white and color prints, with full and double page prints. The collection showcases Nicoletta’s fine sense of composition, not to mention his sharp editorial eye and evocative visual aesthetic.

From the start Nicoletta was a fine portraiturist; it is no surprise that his photo of Milk taken in front of his Castro Camera in 1977 is now immortalized on the Harvey Milk U.S. forever postage stamp. Nicoletta is also equally impressive as a photojournalist and GLBTQ culture, and the civil-rights movement became his ongoing subject.

We all agree that pictures tell a thousand words, but here are a few random thoughts about some of fabulous photos in the book. And lest we forget the trove of historically vital photos of defiance and solidarity along the way to liberation in 2017 a time that the hard fought rights of GLBTQ Americans are again under attack in congress and state legislatures all across the country.

Take for instance a panoramic view of thousands of GLBTQ Americans in the street stretching up the looming hills of the Castro Street capturing the symbolic breadth of the movement’s fight against decades of antigay laws and entrenched homophobia.

Nicoletta captures the tragic atmosphere of the city the night of the vandalism by gay San Franciscans the night after Harvey Milk and Mayor George Moscone’s murderer when Dan White was given a light sentence. Nicoletta’s haunting photo captures a fresco of rioters silhouetted against fires that were started out of anger over the verdict. Equally moving are photos of a city under siege by HIV-AIDS, with AIDS activists being roughed up and hauled into police vans, shouting and defiant, fighting for their lives.

In the book’s introduction, Chuck Mobley, Director/Curator of SF Camerawork writes, “Though he had begun exploring studio portraiture in his photographic practice, he still took to the streets during the height of the AIDS epidemic . . . to document the activism and memorials that were taking place in a climate of cold public indifference.”

Some of the most captivating are Nicoletta’s intimate shots of friends, neighbors, couples, and individuals representing the rich diversity within the GLBTQ community—from gay men cruising outside of the Castro Rock Baths, to gay Zen-Buddhist gay sanctuaries, or Radical Faeries happenings and the high camp troupe The Cockettes and equally bold drag queens and kings in the finest drag couture on the streets of San Francisco. Also street theater from transgender nudists protesting legislation prohibiting public nudity, and the notoriously explicit bacchanalia at the Folsom St. Fair—all part of Nicoletta’s expansive template and artistic lens.

Celebrities pepper the collection: Allen Ginsberg and his young disciple of the moment, drag superstar Divine in performance with fire in her eyes, or an out of drag Divine celebrating with Lily Tomlin on the streets of San Francisco, singer Grace Jones in her resplendent visage in art costumes radiating love to her gay fans. And, most hauntingly, luminous disco diva and fierce AIDS activist Sylvester in performance and photographed again in African ceremonial robes at the June 1976 Gay Freedom Day Celebration in Golden State Park. Nicoletta’s comprehensive visual history of gay San Francisco does indeed, to quote Sylvester’s gay anthem, make us feel Mighty Real.