Levi Strauss Gets a Bright Idea: A Fairly Fabricated Story of a Pair of Pants 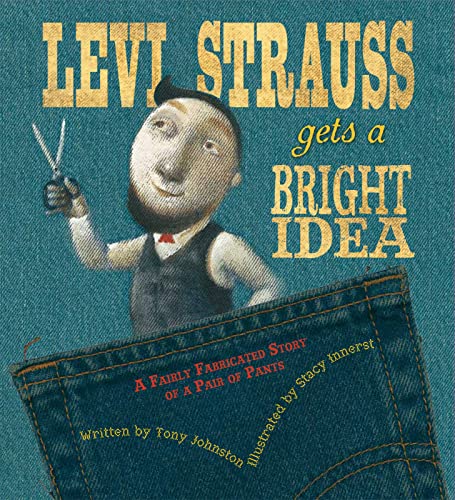 “With a flurry of snipping and clipping, Levi Strauss produces pants that last and last. Why, those men feel such gratitude, they just have to dub their garb after the man who covered their behinds.”

Hard-working miners need tough trousers out in those California fields, but the folks find their flimsy pants just don’t measure up. Pretty soon, they’re grubbing for gold in their long johns or even “in the vanilla”—nude, in other words. If Ms. Johnston’s rowdy plot doesn’t tickle you, the illustrator’s down-home touches will, as when he hides a particular body region with absurd-looking fuzzy blue shrubs. The desperate men try wearing barrels and rags, but they let them down, too.

Luckily, Levi Strauss, a clever, enterprising man from New York City, made his way out West, with a wagon loaded with bolts of blue fabric, scissors, needles and thread. After encountering the “be-barreled men, a light lit up in his brain.” He was bright enough to figure out these men needed pants that would last.

Mr. Strauss tinkers with one material after another, but doesn’t hit on the right stuff until he decides to sew canvas tents to protect the miners from the elements. Eureka! Those tightly woven tents work so well, he realizes he’s found the answer to the wardrobe dilemma.

With a flurry of snipping and clipping, Levi Strauss produces pants that last and last. Why, those men feel such gratitude, they just have to dub their garb after the man who covered their behinds.

The illustrator’s rustic palette of burnished gold, orange and soft blue plays out on an unusual canvas: faded Levis. While this fabric wouldn’t work for more detailed paintings, it lends an appropriately rough look to this tale. The jeans’ worn grain complements the exaggerated features of the raucous miners. Mr. Innerst even makes clever use of the jeans’ seams—to mark the line of a wagon bed, the top of a man’s new pants, even the Golden Gate Bridge.

So now you know the whole truth about how Levis saved workers from an embarrassing predicament and came to hang in closets around the world. But that’s not all; Mr. Strauss went on to put those miners’ discarded barrels to good use by building the city of San Francisco—yet another example of how a clever idea can change the world.

In a more serious vein, the author’s note provides facts about Levi Strauss, who came from Germany to the U.S. in 1847. While Mr. Strauss might not have sewn the first jeans, he’s the one who made them famous. And when he died in 1902, the city of San Francisco flew the flag at half mast for the man who had so generously donated money to help the people there.