Letters to Goya: Poems, Titles and Letters to the Dead 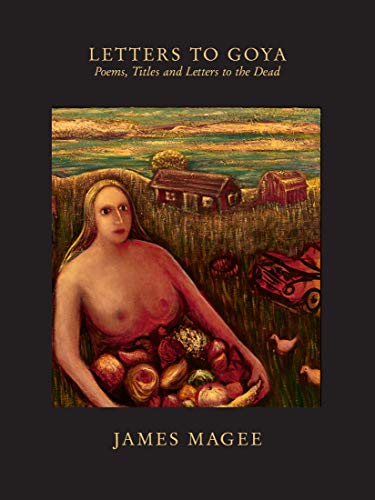 James Magee is renowned for his remote architectural sculpture, most famously “The Hill,” which he has been creating for 40 years or so on 2000 acres of land he owns outside of El Paso, Texas. It has been likened to a contemporary Stonehenge in its imposing, cryptic presence. Magee began as a New York street poet who emerged in the 70s, became a librettist for operas, and collaborated with such virtuosic chamber ensembles as the Kronos Quartet.

His obscurity as a street poet is probably going to remain the case even with the publication of Letters to Goya: Poems, Titles, and Letters to the Dead. His verse is abstract and as inaccessible in many ways as his desert sculptures would be to one of his original fans on the piers off of Christopher Street circa 1977, where Magee would read his poetry to the gay men there to have sex on the desiccated docks.

This collection is an adventure in itself since it can be read backward and forward, at one end the poems or “Titles” as Magee calls them, and flipping the book over are Letters to Goya.

There is no escaping the fact that this book is obsessive in its themes and scenarios, but Magee impresses with his concrete imagery, lyrical counterpoint, and subtle internal rhyme schemes.  Magee not only is the enigmatic observer, but he also morphs into many characters or ‘anima personae’ as it is explained in the forward by a real or invented editor.

Consider this hallucinogenic imagery: “Today is paradise overcast . . .” the opening image of a phantasmagoric landscape of “wafers of time/gathering together from within the beginning/four or five thousand years across/lost at odd angles to one another . . .”

From that epic symbolism, Magee contemplates the “and there beneath a sky drained of laughter, void of pity, you sit my Louie, on your tractor forever smiling/your deranged motor running, soon to sow another row of ditties,/your mother’s songs about what went wrong with her children’s children/. . . you begin to sing. You begin to pray./But I’m not ready . . . I’m never ready.”

Much of Magee’s imagery of harsh American terrain is both illusory and startling in its intimacy.

“I remember you standing on the dock in the breeze, David/white clouds behind you/your blue and yellow shirt billowing/and how you peered uneasily into my camera.”

Are there further clues to Magee’s life from “Keeping Peace with the Greater Army of fathers and sons . . ./“I know I’m not the son you wanted Dad . . . I insisted on poetry/In honor your plainspoken decency Dad/and with words we once both feared,/I will fashion for you a mantra/disguised as a clothesline/repeating your name/every morning before breakfast/and again at night/until the end of my days,/or until you come home.”

Flipping the book over to those Letters to Goya, the contents of which are ostensibly found objects by Magee and chronicled on an old manual typewriter, complete with typos, XXXXouts, and keystrokes that don’t exist anymore along with the enigmatic daily letters by The Duchess, which are mind-numbingly mundane until they are not. Is the Duchess insane, schizophrenic, or another poetic mirage by Magee? She lives in Waikiki Trailer Park, Sweetwater, Texas, in 1955, in time traveling exile from her imagined lover from another century, Spanish court painter Francisco Jose de Goya, and rails against his wife, in between talking about baseball teams scores, her nutty neighbors and sales in the Sears catalog.

Is this provocative surrealism, literary satire or ruse from a major American artist to trying to confound? Magee’s is an idiosyncratic voice, to say the least, and better not to try to completely decode. It just is.

Magee’s poems may remain in literary obscurity and as inaccessible as they can first seem, they draw you in, bit by bit, as the various characters and snapshot scenarios appear and vanish, enigmatic and unresolved. Yes, there are so many extra pieces to this poetic puzzle. However abstract, Magee has stated that many of his Titles eventually mounted as annotations of his visual art. Maybe a visit to The Hill would reveal Magee’s secrets . . . or likely add to them.