Letter to the Americans 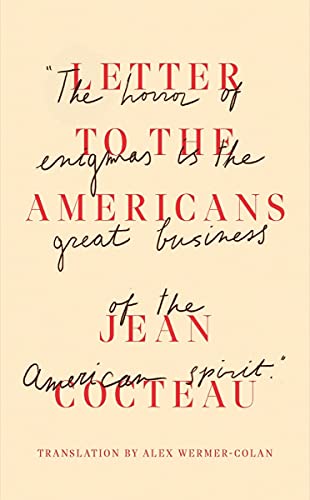 In the winter of 1949 the celebrated French avant-garde artist Jean Cocteau came to New York to give a talk at the screening of his latest film, The Eagle with Two Heads. He remained in the city for 20 days, during which he was feted and dined by New York’s artistic community. He returned to France on a night flight and, while his fellow passengers dozed around him, composed a long letter to his American hosts.

It is a kind of love letter—part thank you note, part assessment of the American character, part encouragement to Americans to fulfill their national destiny, part warning against tendencies that threaten to thwart America’s mission to lead humanity to a new level of social accomplishment. The letter was first published in France in 1949, and now in a new translation issued by New Directions, whose founder, James Laughlin, was a friend.

The letter takes its place alongside other penetrating observations of the American character penned by writers as diverse as Alexis de Tocqueville (Democracy in America), Frederick Law Olmstead (The Cotton Kingdom), John Steinbeck (Travels with Charley), and Henry Miller (The Air-Conditioned Nightmare). The letter is subtitled “The Horror of Enigmas Is the Great Business of the American Spirit,” and it is America’s relationship to the overriding reality of enigma that Cocteau wishes to explore.

For Cocteau, an appreciation and acceptance of enigma is the key to understanding life and living it well. Enigma is found in the irreconcilable tension between opposing forces—of dream and reality, unconscious and conscious, irrational and logical, spiritual and material. The enigmatic state is the state of the waking dream, a borderland that Cocteau explored in films such as Beauty and the Beast and The Blood of the Poet. He finds himself in this state aboard his night flight to Paris, the aurora borealis lighting up the sky beyond his window as those around him sleep.

Cocteau recognizes America’s faults—materialism, excessive practicality, a need for order—but regards us with an affectionate eye. “Be what you are,” he urges. “A people who preserved their childhood. A people young and honest. A people in whom the life blood circulates. . . . Don’t surrender yourself to the lethal vertigo of radio and television.” Were he writing today, Cocteau might also mention cell phones.

It is refreshing in our time of social and political disturbance to read these words. But haven’t we succumbed to “the lethal vertigo”? Cocteau might see in our current tumult the seeds of a new creative upsurge. For, in his view, it is “disorder that makes possible creation and surprise.”

Cocteau compares America to his native France, where disorder thrives, producing master artists like Picasso, Matisse, and the surrealists. New York, by contrast, with its perfectly symmetrical skyscrapers, he calls a “standing city” that lacks the capacity for repose and the dreaming that nurtures creativity. He calls for cultural transfusions between the two nations. “Bring to the attention of your leaders the importance of organizing an unencumbered route where culture won’t be halted at the Customs and Exchange Office.” This request brings to mind America’s periodic fondness for banning books it deems obscene or “inappropriate” as it seeks to avoid disorder.

In our current moment of distrust and anger and suspicion, Cocteau’s reminder is a welcome tonic.