Let's Play Two: The Life and Times of Ernie Banks 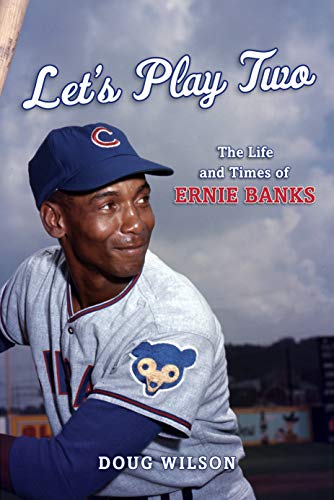 Robinson’s entrance into major league baseball in 1947 changed more than sports; it was also a significant moment in the ongoing Civil Rights movement within the United States. The 1950s saw the emergence of many African American baseball players. Following in Robinson’s footsteps were stars like Larry Doby, Don Newcomb, Willie Mays and Hank Aaron. They played baseball as the walls of segregation began to crumble in American society. There are still many fascinating stories to be told about this period in American history. These stories will hopefully highlight the achievements of men not only elected into the baseball Hall of Fame but individuals who became American heroes.

When Doug Wilson writes about Ernie Banks it is done with care, admiration, research, and respect. He begins his story with a focus on place and family. Wilson begins his biography of Ernie Banks by writing about Dallas, Texas. He takes us as far back as the 1870s when it was just a small town. Wilson wants the reader to know and understand the various historical factors that would shape the family of Ernie Banks. Wilson writes also about Kansas City and Chicago. But why was Ernie Banks so quiet? How did he handle race relations with such tolerance and grace?  How did a man who loved to win respond to being on a team that too often lost? What motivated him to always be the gentleman? What were his private thoughts?

Doug Wilson’s book is filled with sustenance, detail and documentation. The comments he includes of people who knew Banks enhances the storytelling of Let’s Play Two. Yet Wilson’s own words tell us much on the page. Very early in the book we get a detailed painting of Ernie Banks and not a quick photograph.

“Ernie seemed to have an innate sense of timing—when to dodge impending trouble. He perfected the fade-out. He might be walking down a street with a group of guys, joking and laughing, looking for something to do. When talk among the group drifted to something that sounded like trouble, or girls they would turn around and Ernie was gone. Disappeared. Quietly faded away. Ernie had an internal barometer—acutely attuned to changes in the atmosphere that warned of approaching squalls and gales—that helped him avoid hazards that sidetracked other kids.”

Wilson’s insight into Ernie Banks also carries over into his excellent commentary about the Negro Baseball League. Banks emerged as the league was coming to an end. Jackie Robinson’s success drew the crowds away from what were once segregated ballparks. Wilson’s information in his third chapter “Kansas City Monarchs” is filled with names needing several biographies or even a documentary film or two. Buck O’Neil, Rube Foster, and Tom Baird were very important to the game of baseball.

If one knows more about Willie Mays or Hank Aaron it’s then essential to read Let’s Play Two. Ernie Banks was so good he went straight to the majors in 1953. This was without any minor league service and only two years playing in the Negro League. Banks would be the first National Leaguer to win two consecutive Most Valuable Player Awards, play in 14 All-Star Games and hit 512 home runs.

Yet the awards and stats tell us very little of the man. When one thinks of Ernie Banks one might think of stars like singer Nat King Cole and actor Sidney Poitier. These men carried themselves with dignity. They were cultural ambassadors negotiating success in a racially divided world.

“Ernie did what he did best—play baseball. He betrayed no emotion, good or bad, but just went about his business playing the game. And he played hard. He sprinted through first base like a man running from a fire even on routine infield popouts. He never threw a bat or cursed after a strike out. At the plate, he took his position and stared at the pitcher with an absolute blank face, waiting on the pitch before unleashing his explosive swing.”

In Doug Wilson’s ninth chapter “Windfalls” there is a curve one finds Ernie Banks surprisingly swinging at. In 1962 Banks decided to run for alderman of Chicago’s Eighth Ward. He claimed he wanted to get into politics to help youth. This decision perhaps provides a small clue into who Banks was behind the constant smile and optimism. Banks throughout his baseball career was involved with many Chicago community organizations. His high profile in the city as well as his friendly relationships with sportswriters helped to shape the personality that would make him Mr. Cub. But who was Mr. Cub? Wilson asks this question throughout his biography. By the end of the book we still don’t know. However, there are fingerprints one might become curious about. One sentence might require meditation and investigation. Wilson writes:

“If Ernie was battling depression, he hid it well in public.”

“Wrigley Field and baseball was my whole life, a place I could make decisions, when to swing, when to run, when to talk, when not to talk. But when I was at home, none of that existed, I had a wife . . . I couldn’t wait to get to the park. That’s where I could control my life, be at ease and friendly and socialize with people.”

Ernie Banks was a complex individual. He was the man with the smile. We are left to wonder if it was just part of a mask. What did the smile hide? Was baseball a game or primarily a refuge from a life that started in Dallas, Texas? Doug Wilson’s Let’s Play Two is a tribute to a great American baseball player. The book however includes a very critical comment by John Roseboro the African American catcher who played for the Los Angeles Dodgers. His words create a rain delay over Wilson’s book.

“Ernie Banks was just too good to be believed. Maybe it’s sacrilege, but I believe Banks was a con artist. He was always smiling and always telling you what a great day it was for baseball, and what a great game baseball was and how lucky we all were that we were getting to play two today. No one smiles al the time naturally unless they’re putting it on and putting you on.”

Roseboro’s comments are perhaps a mirror for all of us. How do the times we live in shape how we survive? When might a person become trapped inside the image they create for themselves? Doug Wilson should be applauded for writing a  biography about a good man who died on January 15, 2015, from a reported heart attack. Ernie Banks was 83 years old. One wonders if all the love for this man created a shadow over a broken heart. Banks played 19 years for one of the worst baseball teams of his era. One is left to ponder if his smile was simply a balm for suffering. Did Ernie Banks ever play the blues?