Let Me Tell You a Story: A Memoir of a Wartime Childhood 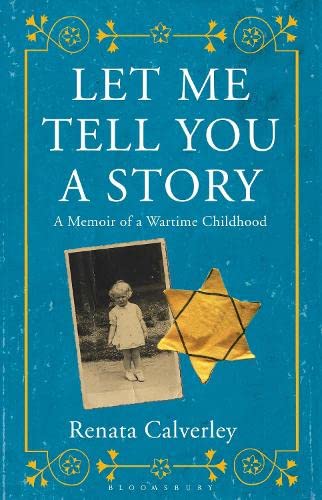 Let Me Tell You a Story is a powerful memoir about a Jewish family torn apart by World War II and the Holocaust.

Swept from her adoring mother and grandmother, little Renata is handed from one stranger to another, descending into a lurid, unending nightmare. She must endure the unendurable to survive. This memoir is terrifying, appalling, captivating and breathtaking. With death waiting at every turn, this bright, innocent child must find a way to survive.

In September 1939, two-year-old Renata’s life is torn apart when Nazi Germany invades Poland. Her father, a physician, had already joined the Polish army; his survival and whereabouts in Europe remain unknown. When the Gestapo arrives, Renata, her mother, and grandmother are forced out of their comfortable apartment into a decrepit ghetto where they live in squalid conditions with many strangers.

Within this ghetto, children are forbidden to live with adults, who are assigned to slave labor for the German war effort. The children are collected and sent away in large trucks. Unable to part with her beloved daughter, Renata’s mother hides her each day from the German troops. One day, Renata’s mother and grandmother do not come home. They have been selected for transport to Auschwitz.

Over the next six years, Renata is starved, mistreated, and shoved from one stranger to the next, a small child unable to comprehend what has happened to her idyllic life and her adoring family. Only the fact that she has blonde hair and blue eyes—closer to the Aryan ideal—works to her advantage as she remains in hiding one step ahead of her tormentors.

War is too abstract a term for Renata to comprehend. She only knows that her life has become unbearable, that she is in the hands of strangers, and that death waits behind every turn. Only the hope that her father remains alive gives her the impetus to go on. As the war progresses, she is forced to endure starvation, sickness, horrid weather, squalid living conditions, bombings, shootings—and always the threat of the German troops waiting to take her away or worse.

Renata fantasizes about fairytale worlds from stories she was read before the war. While living in a strange cottage in the forest, a woman teaches her to read. Those fairy tales and new books filled with fantasy occupy her mind as she seeks escape from wanton death and destruction. Hans Christian Andersen and David Copperfield swell within her mind as the war around her ravages on.

Let Me Tell You a Story is an evocative, well-written, haunting tale. The reader sometimes must remind himself that this is not a novel, but a retelling of a childhood lived on the edge.

This book is a must read for anyone who wants to understand how difficult life could be for children whose loved ones became victims of Nazi death camps. Her survival is a testimonial to a few caring relatives and to righteous gentiles who risked their lives every day to hide Renata, a child victimized in ways that most of us can never fully comprehend.