Let Me Be Frank With You 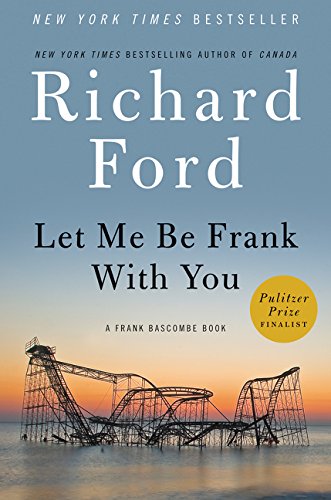 “Richard Ford has established himself as one of contemporary America’s most interesting storytellers. Let Me be Frank with You does nothing to diminish this well-deserved reputation.”

Hurricane Sandy has recently scarred New Jersey, wrecking the shore, creating a need for hundreds of volunteer grief counselors, and over-heating local talk radio. Against this backdrop, Frank Bascombe, an aging shore resident who providentially moved inland shortly before the storm, is reconnecting with old friends and estranged family. These encounters will expose his flaws and test his character.

Richard Ford’s Let Me Be Frank with You is a collection of four novellas packaged as a novel. All four of the novellas are linked by the same protagonist (retired realtor, Frank Bascombe) and setting (the fictional town of Haddam, New Jersey). All four novellas are built around Frank’s interaction with a particular person from his past: Arnie, the man who bought Frank’s old shore house, recently demolished by Sandy; Ms. Pines, who grew up in Frank’s present-day house, the scene of a gruesome murder; Ann, Frank’s ex-wife, who has returned to Haddam to combat Parkinson’s in luxury; and Eddie Medley, an old acquaintance who is slowly dying.

Like a number of contemporary New Jersey storytellers, from Bruce Springsteen to Chris Gethard, Richard Ford revels in New Jersey’s paradoxes: its mix of tough talk and sophistication; its ethnic diversity and identity-group provincialism; its confluence of new-economy affluence and rust-belt decline. And it is the small details about life in New Jersey that alight Mr. Ford’s stories, such as:

Similarly, Mr. Ford intersperses the profanity-laden machismo of “Jersey talk” across a cast of characters capable of great subtlety and complicated relationships. Frank’s a flawed hero: he’s a man who secretly fears his current and ex-wife ganging up on him, and finds relief in the fact that his two grown children both live out of state.

But for all of his insecurities and selfishness, Frank still manages to do the right thing: whether driving through the post-Sandy apocalypse to meet an old client, visiting a dying acquaintance, or showing genuine hospitality to a stranger looking to tour his house, the house of her childhood.

There is no sex, violence, or pyrotechnics in Let Me Be Frank with You, just subtle stories told with wit and grace. Across previous short stories and other Frank Bascombe books, Richard Ford has established himself as one of contemporary America’s most interesting storytellers. Let Me be Frank with You does nothing to diminish this well-deserved reputation.