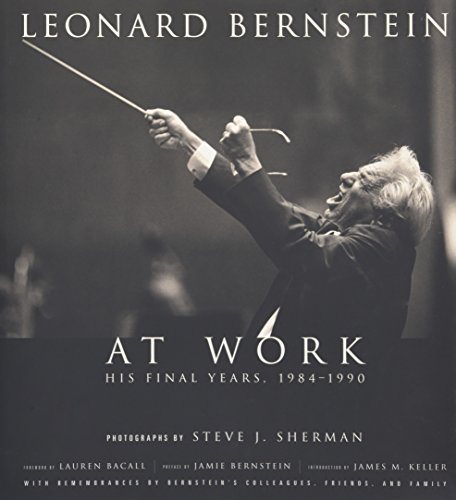 Leonard Bernstein was not a classically beautiful man. He was not the type of person to be featured on the cover of GQ or Vogue. And yet, the photographs (the mere word pictures does not do them justice) collected here lack neither beauty or vitality. This work features iconic image after iconic image, laid out for us in stark black and white alongside moving and deeply personal quotes from friends and colleagues. It is hard to imagine a photoretrospective of Bernstein’s life could be this powerful—a musical retrospective, yes. But photographic, no. Bernstein was many things in life: composer, conductor, husband, teacher, father—but he was never silent. Maybe that is why this collection works so well. Bernstein (or Lenny to his friends) was lovable, but could be somewhat cantankerous at times. Yet having the images only and no sound, the viewer can enjoy the Bernstein experience without fear of some reprisal ruining the moment. In the book, Newton Mansfield tells the story of rehearsing with the New York Philharmonic. The players had gotten in trouble earlier in the day for talking too much in rehearsal, so during a brief break, the hall was silent. Bernstein looked around and asked them, “What the hell is this, a morgue?” That was typical Bernstein. In his preface to the book, Steve Sherman says that he did not set out to catalogue the last years of Lenny’s life. Over the years he had simply developed a relationship with Bernstein and these photos are the result of the friendship. For anyone familiar with iconic images of Bernstein (and there are many), the most interesting part of book is what Sherman calls the “outtakes.” Here is how Sherman explains what outtakes are: “Normally in concert photography, one ‘action’ photograph is published as the representative of definitive image of a particular event, while most, if not all, others remain unseen. However, the photos taken just seconds before and/or after that primary image, ‘outtakes’ can often place that main image in its wider context and reveal the full arc of the movement and momentum in a way that a single photo cannot.” The outtakes work almost like the old cartoon flipbooks. If you look at them fast enough, it’s almost as if Bernstein is still conducting, still making music. It has been 20 years since we lost one of the most iconic American composers, and yet he still looms large over the world of orchestral music. In the book Bernstein is quoted as saying, “Only the idea of the sound has to stay—not the tone itself.” This is true of the man as well. In leaving us his legacy, Bernstein left us the idea of a man, not the man himself.