Legends of the West (A Deputy Marshal Bass Reeves Western) 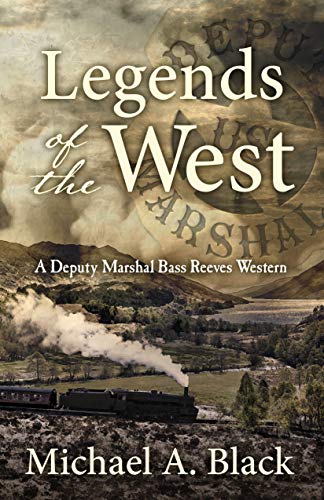 “The action is gritty, the locales descriptive, some of the situations could have happened, and a good many of the characters actually existed—what more could a reader ask for in an action novel that is also a Western?”

In the Indian Territories, former slave Bass Reeves, now a Deputy US Marshal, and his good friend David Walks as Bear, a Lighthorse Indian deputy, come across a group of Texas Rangers who have been killed by someone using a Gatling gun.

The killer made one mistake, however. One of the Rangers survives—for a little while, at least. Extracting a promise from Reeves to send his badge back to the Ranger office in Texas, Ranger Reed dies.

Reeves, who has been sent to investigate rumors of white men selling whiskey and guns to the Indians, now has a double mission: to find those men, but also to find the Rangers’ killer.

It doesn’t take long to discover the crimes were committed by the same gang.

Lucien T. Stutley is a writer for Beadles, a New York publisher. He writes those notorious dime novels about the West that makes everyone think it’s a thoroughly lawless place where people like Jesse James is a western Robin Hood and Buffalo Bill is one of its more famous sons. Now he’s been sent by his boss to the very place he writes about, to get some local color, and to find an outlaw worthy of being glorified in his next novel.

He finds his “hero” in Marion Michael Donovan, an Irish immigrant who’s been a killer since the age of 14. Handsome, educated, and cruel as the day is long, Donovan has killed the crooked sheriff of the town of Temptation and taken over.

Donovan wants Stutley to immortalize him in his next novel as the “Rob Roy of the West. His next job is the robbery of a gold shipment from the US Army and now that he has a Gatling gun, he may be unstoppable.

Not if Marshall Reeves has any say in the matter. In fact, Reeves has a specific prayer for the occasion as he rides toward the town where Donovan and his gang reside: “Lead us into Temptation.”

There’s a legend that Bass Reeves was the model for the fictional character, the Lone Ranger. Whether this is true or not, as soon as Walks as Bear utters the word “Gimoozabie,” readers are going to be alerted to that association. When the two chance upon the slain Rangers and discover Reed, the sole survivor, they’ll be certain of it.

The use of that name for Reeves by Bear is a running joke throughout the story, but after about the fifth usage—especially after Reeves tells Bear to stop saying it for also the fifth time, the joke runs a little thin. It’s only when his friend threatens to call Bear by the Spanish word “tonto”—meaning “fool”—that the Lightfoot officer stops.

The fact that Reeves gave silver dollars to those who helped him also furthered the legend.

There are other, more subtle name-drops, also, such as the fact that the writer Stutley is from Zanesville, Ohio, and has a nephew named Zane, who loves to read dime novels and wants to be a writer.

Marion Michael Donovan, who seems to have borrow his first two names from a popular Western movie star who won’t be mentioned, is depicted in a way similar to a James Bond villain: handsome, educated, and completely ruthless when it comes to getting what he wants. Even in the showdown between him and Reeves, he shows an utter lack of fear that Auric Goldfinger might envy, composing a limerick as he draws his gun.

These incidental literary tidbits aside, the action is gritty, the locales descriptive, some of the situations could have happened, and a good many of the characters actually existed—what more could a reader ask for in an action novel that is also a Western?

All in all, Legends of the West is the most entertaining Western to come along in a while. It has humor, exceptional descriptions, and the delineation of its characters give them an authentic feel. If they aren’t real people, they should have been.

After finishing this novel, the reader will undoubtedly feel encouraged to see out more Bass Reeves stories, to learn more about this lawman who truly became a “legend in his own time.”