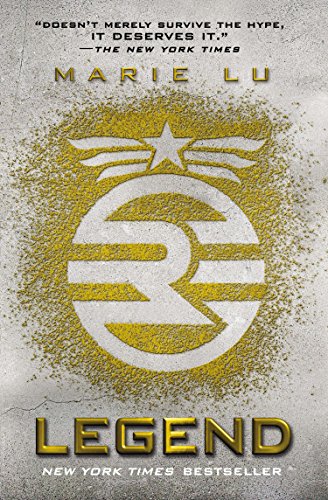 “Much of what has been said or written about Legend by Marie Lu could be called hype, but this debut novel is substantive and will stand on its own; . . . Forget the hype and comparisons; enjoy this story for what it clearly portrays: a legend in the making.”

Legends get started by rumor—or hype if you will. Hype sells that rumor, and if there is substance to it over time it becomes a legend. Lately, dystopian novels for young adults have become extremely popular, but it is getting difficult to believe the hype surrounding them. Not all of them are substantial works, and the hype—talk of movie deals and comparison to famous works previously published—is ethereal.

Much of what has been said or written about Legend by Marie Lu could be called hype, but this debut novel is substantive and will stand on its own; Ms. Lu has found a way to ground Legend (book one of three) with fascinating infectious disease, a well-developed story-line, and resilient characters that grow with knowledge—the nemesis of dystopian society’s rulers.

Day is an impoverished, street-smart, pendant-wearing teenager who isn’t what most people think him to be. He gains knowledge of how Filoviridae (a hemorrhagic virus from the same family as Ebola virus) has taken hold of his community. This plays a central role to the whole book and is completely unresolved by the end (books two and three are being written).

There are hints that the virus comes from animals kept in underground farms (zoonotic infections), but we don’t know if it is purely zoonotic, with sporadic spread, or is planted somehow. Cures, suppressants, and a vaccine for this plague (used as a general term for epidemic) are available, but only to the wealthy or well-connected. They fetch a hefty price on the black market.

Early in the story, government doctors, resembling historical plague doctors from the 1600s, wearing gas masks and cloaks enter homes with special blood-readers that test the inhabitants. Perhaps they know something that we don’t know about this particular virus; in reality, if Filoviridae were suspected, special level-4 infectious-hazard equipment (air tight suits with self-contained breathing apparatus) would be required for this duty.

On the other hand, this story takes place in the future, when life is very different from what we know. Eerily, homes where infection is found are marked with an X. From a distance, Day watches as the door to his family’s home is marked—differently from all the others.

June and Day have particularly different lives and perceptions, but similar traits; they are both bright, strong, logical, loyal, and rebellious. They are on opposite sides of the War and on opposite sides of the tracks, but that is all secondary to an event that brings them together—her brother’s death. The Republic blames Day for it. Throughout the book, the battle between perception and knowledge plays out. Day and June learn that not all of what they’ve believed all their lives is true.

After June’s brother Metias is killed we are introduced to The Republic’s Commander Jameson through June’s eyes. The cruelty of Commander Jameson appeals to June’s sense of duty and attention to detail, but her love for her brother momentarily blurs this:

“. . . Commander Jameson halts in front of the white sheet, then bends down and throws it aside. I stare down at the dead body of a soldier clad in military black, a knife still protruding from his chest. Dark blood stains his shirt, his shoulder, his hands, the grooves of the knife hilt. His eyes are closed now. I kneel before him and smooth strands of his dark hair away from his face. It’s odd. I don’t take in any details of the scene. I still feel nothing but that deep numbness.

“‘Tell me about what might have happened here, cadet,’ Commander Jameson demands. ‘Consider this a pop quiz. This soldier’s identity should motivate you to get it right.’ I don’t even inch [sic] from the sting of her words. The details rush in, and I start talking. ‘Whoever hit him with this knife either stabbed him from close range or has an incredibly strong throwing arm. Right-handed.’

“I run my fingers along the blood-caked handle. ‘Impressive aim. The knife is one of a pair, correct? See this pattern painted on the bottom of the blade? It cuts off abruptly.’ Commander Jameson nods. ‘The second knife is stuck in the wall of the stairwell.’ I walk toward the dark alley that my brother’s feet point to and notice the sewer cover several yards away. ‘That’s where he made his getaway,’ I say. I estimate the direction the sewer cap is turned in. ‘He’s also left-handed. Interesting. He’s ambidextrous.’”

Day is made out by The Republic to be a criminal unable to pass his Trial, but has a caring side that runs deep and is returned by others he has cared for: “. . . I let out a deep breath. Eden. Of course it’s Eden—still acting like a little engineer even with the plague. At least I managed to get some medicine. Everything’s going to work out. Eden will be okay for a while, and I don’t mind dealing with John’s lectures. As for my lost pendant, well . . . for an instant I’m glad that my mother can’t find out about this, because it would break her heart.

“‘I couldn’t find any cures, and I didn’t have time to do a search.’ ‘It’s okay,’ Tess replies. She prepares a fresh bandage for my arm. I see my worn old cap hanging on the back of her chair. ‘Your family has some time. We’ll get another chance.’”

The chapters oscillate between Day’s and June’s perspectives, and that plays a key role, but other characters seen through their eyes stand out. There is Metias and the legacy he has left. There is Thomas, Metias and Junes’ childhood friend. However, Chian causes the creepiest, down-in-your-throat-uncomfortable-feeling since President Snow’s initial appearance in an opening scene of Catching Fire.

We listen from inside June’s head while at her brother’s funeral: “. . . On my left side is a man named Chian who organizes and oversees all Trials taken in Los Angeles. He administered mine. What I don’t understand is why he’s here—why he even cares that Metias died. He’s a former acquaintance of my parents, so his presence is not unexpected—but why right next to me?

“Then I remember that Chian had mentored Metias before he joined Commander Jameson’s squad. Metias hated him. The man now furrows his bushy eyebrows at me and claps a hand on my bare shoulder. It lingers there for a while. ‘How are you feeling, my dear?’ he asks. His words distort the scars on his face—a slice across the bridge of his nose, and another jagged mark that goes from his ear to the bottom of his chin . . .”

Given the propelling storyline and remarkable complexity of characters, one can’t help but compare Legend to previously published works. There is a seemingly dangerous society, with often hidden, but caring individuals that work together. These individuals try to sort out the truth, are loyal to each other, and travel, taking the reader along with them. It’s no wonder that Watership Down by Richard Adams is one of Ms. Lu’s favorite books. Although both are of the dystopian genre, a direct comparison between the two would be dangerous in itself; however, there is a tacit, rabbit-warren and Hazelrah quality to Legend.

Forget the hype and comparisons; enjoy this story for what it clearly portrays: a legend in the making.