A Legacy of Spies: A Novel 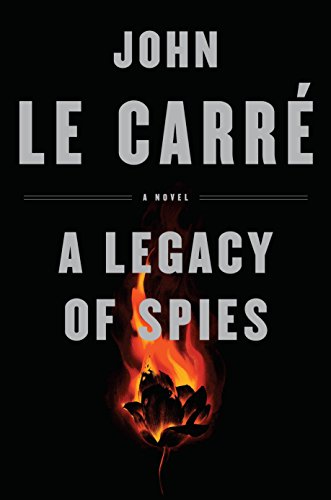 When all hands are dirty what is justice?

In A Legacy of Spies, author John le Carré explores the aftermath of moral choices made during the Cold War.

A Legacy of Spies uses some of the same cast of The Spy Who Came in from the Cold, which was first published in 1963, though readers need not be familiar with le Carré’s earlier book to enjoy this one.

The hero is retired agent Peter Guillam who is living a more rustic life as a gentleman farmer in France. Peter’s day-to-day life seems idyllic, but he has just received a letter that calls him back to the “home office.” This letter also contains the threat that if he doesn’t go back, his pension will be cut off.

Part of the fun of reading le Carré is having his characters explain the practice and pragmatics of spying. Peter recalls his training or “tradecraft” back when the British Secret Service or MI6 was called “the circus.” Peter also reminisces on the business of spying and gives a romanticized, nostalgic look at how spies felt about their work during the Cold War. Peter (or le Carré voicing his beliefs through Peter) claims today’s business of spying is bureaucratic and soulless.

Inside MI6 headquarters, Peter’s passport is taken away, and he undergoes “friendly” interrogation. Another fun aspect is the characters le Carré intends to demean he gives Dickensian names; the lead interrogator’s name is “Bunny.”

Bunny’s Interrogation is intended to trip Peter up and make Peter the scapegoat for a lawsuit being brought against MI6. The lawsuit stems from an operation that happened 50 years ago; the lawsuit brought by the children of murdered agents. The belief of spies (during the Cold War) was that breaking rules was acceptable to save lives—the deaths of a few (that is, the death of spies and their operatives) was worth the cost of preventing worse (nuclear war). Bunny tells Peter “That you were assigned . . . to covert operations where the death of innocent people was considered an acceptable even necessary outcome.” Bunny then emphasizes that things are different now.

Bunny tells Peter that he was invited back to England to account for operation “Windfall,” for which almost all records were lost, or stolen, but more likely deliberately destroyed. As Peter’s name was on one of the remaining documents, he’s the one MI6 reached out to. Bunny believes that Operation Windfall might have been illegal, and if Peter’s answers aren’t to MI6’s liking, Peter will be hung out to dry.

One would imagine for a government agency, the responsible party would be the leader of the operation, and Peter was not the leader but only a bagman. However, Peter’s boss back then, George Smiley, is nowhere to be found. In regards to plot, George Smiley is the one key character that le Carré hides until the very end. As another reviewer has pointed out, if one were to account for proper ages the recurring character of George Smiley would be about 100 years old (if he were a real person.) But don’t pay too much attention to logic and continuity—this tale requires the proper dosage of suspension of disbelief.

A Legacy of Spies is told from Peter’s point of view, and as Peter was a low-level agent, he did not know everything. Agents are only told what they need to know, and for good reason. One is, if captured by an enemy, the agent would have less to say under torture, which protects the lives of others. Another is, if agents knew enough to truly understand what they were doing, they might not do it.

Peter is in a bind as telling the truth as the truth might be just as dangerous as lies, so he triangulates just enough to be believable. In the triangulation, the reader gets out-of-order bits and pieces from Peter’s memory. This is not too confusing as the reader can flip back and forth in the book in deciding what is truth and what is lies, however for a movie (as A Legacy of Spies will most certainly become), a director will have difficulty both being faithful to the book and keeping viewers following along.

Experiencing the puzzle pieces then figuring out how they fit serves as the majority of the tale of A Legacy of Spies, and loose ends aren’t tied up until the last fifth of the book. The denouement however is a letdown in the manner of: if this one thing only had been known at the start then there would have been no need for all this mishegoss. For a tale like this, the mishegoss is the point. It’s always the journey and never the destination.