A Legacy of Murder: A Kate Hamilton Mystery 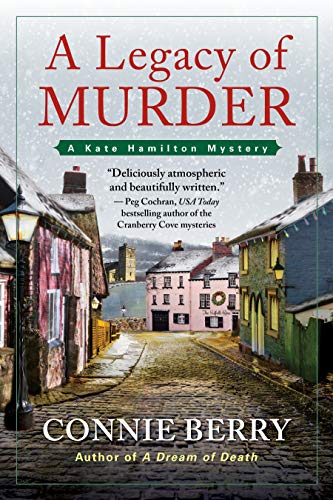 “Berry takes her protagonist down the path to discovery, and the perpetrator turns out to be the least likely character. It is a very satisfying ending.”

A Legacy of Murder by Connie Berry is a contemporary mystery set in the small English town of Long Barston, Suffolk. Protagonist Kate Hamilton, an American antiques dealer, is visiting her daughter, Christine, who is interning at an old English manor, Finchley Hall, when things go terribly awry.

As Kate looks forward to spending time with her daughter, the visit turns cold when a young woman's body is discovered floating in Blackwater Lake on the hall grounds. This is not Kate's first encounter with a murder, but this time she has a romantic interest to help her find the culprit, Detective Thomas Mallory of the Suffolk Constabulary.

Life starts to get dicey when Kate realizes that Christine's boyfriend, Tristan, has an eye for other lovely young ladies, much to Christine's distress.

As if Kate's worries about Christine were not enough, she learns that the murdered girl, Tabitha King, was hired to plan an exhibit around the "Finchley Hoard," an age-old collection of valuable antiques owned by the Finchely-fforde family. The festival will be the first time in years that the "Hoard" will be put on display.

When it is learned that Kate's experience with antiques is beyond reproach, the lady of the manor, Lady Barbara Finchley-fforde, approaches Kate and asks her to take on the responsibility of completing the plans for the exhibit. Kate agrees.

Kate learns quickly from Tom that Tabitha's death was not a suicide as first assumed but was actually a murder. Add to that problem the fact that the young woman was pregnant, and the mystery deepens.

Berry's cast of characters is a good one, with just the right number of possible candidates to be responsible for Tabitha's death. Interns: Michael Nash, Prue Goody, and even Christine, may not have a strong motive, but they are in the location. And there are the employees and town citizens: Alex Devereux, the manager of the festival; Gedge the gardener; Peter the gardener's assistant; Vicar Edward Foxe; Mugg the butler; and even Lucien, Lady Barbara's estranged son. Kate has a large group to choose from, and she must whittle down the list until she finds the guilty party.

The story takes several well-planned twists and turns as the plans for the festival and the search for the murderer begin to overlap. The prize possession of the Finchley Hoard is a ring once owned by one of Lady Barbara's ancestors. Although thought lost, the ring turns up just in time to make its appearance at the festival. And yet, a series of thefts occurring around the region puts everyone on their guard, lest the ring is stolen at the festival.

As the investigation continues, a stranger is seen lurking through the neighborhood, and the question becomes, Is this Lucien, the long-lost son? When the stranger is murdered on the grounds, it is soon learned that Lucien is not the victim. And the question remains, where is Lucien?

The water begins to get muddied for Kate when she learns that both murders might be connected with a murder that occurred over 20 years ago on the manor grounds—a murder that Lucien was suspected of committing. At the same time, Christine and Tristan's relationship seems to be crumbling when Alex steps in to create the inevitable triangle.

As the festival begins, security is tight. The festival is a success, and yet the worst possible thing that could happen does: the ring is stolen. At the same time, Alex disappears, and as the search party combs the grounds, her crumpled body is found. Although she is alive, she is unconscious. The prime suspect surfaces: Christine. The verbal and physical fisticuffs they had over Tristan, and Christine's refusal to account for her time puts her in Tom's crosshairs.

Kate is more determined than ever to find the real perpetrator of the crimes and she follows a path with Ivor Tweedy to uncover information about several unaccounted-for Hoard items, and their search leads them to a reclusive collector and several answers.

Berry takes her protagonist down the path to discovery, and the perpetrator turns out to be the least likely character. It is a very satisfying ending. Plus, she leaves the door open for more mysteries and romance with Kate and Tom. This one is a keeper.