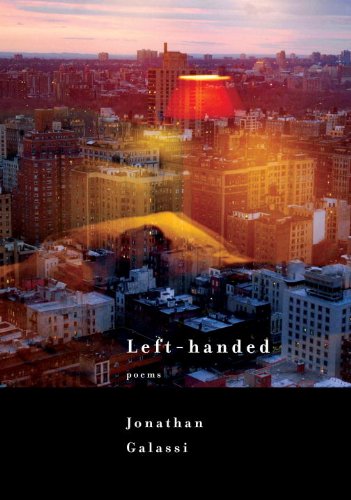 “Left-Handed: Poems is strongly recommended to all poetry lovers and to all readers who find they must radically change their lives in order to live more authentically.”

If the movie Beginners were a book of poems that book would be Left-Handed: Poems by Jonathan Galassi.

Like Hal Fields, the character played by Christopher Plummer, in his mid-fifties Mr. Galassi fell in love with a younger man and discovered or acknowledged to himself that he is gay. This realization caused a crisis in his three decades’ old marriage, which ended six years later in divorce, and fueled the writing of the poems in this book—his most emotionally raw and formally inventive to date.

The book’s three sections, A Clean Slate, The Crossing, and I Can Sleep Later correspond to before, during, and after the speaker’s unconsummated relationship with a male character he names Jude, whom Mr. Galassi has acknowledged elsewhere is a fictional representation of the literary agent Bill Clegg, the above mentioned younger man with whom he fell in love.

The poems in A Clean Slate express senses of mortality and lack of fulfillment. In the section’s title poetic sequence he asks,

“Who remembers
Delayed Gratification?
Save it for later,
For a rainy day.
But later’s now,
late’s now.
Taste while you can,
forget tomorrow.
Think when tomorrow comes.
Mortgage the future.”

In his day job Mr. Galassi is president of a major publishing house. His career in publishing is perhaps a cautious compromise between his lawyer father’s career path and being a full-time writer. Somehow that is also tied-in to traditional notions of gender:

“how little I feel able
to wear the clothes that are laid out on the bed
how I admire those who wouldn’t wear them.
But that’s not the whole story:
I like wearing them;
I like being a man
when I can.”

In his single quatrain length poem “Young” Mr. Galassi describes how an internalized homophobia prevented him from forming healthy same-sex relationships as a young man:

“I tried, and each attempt was a fiasco.
I yearned, but every love of mine was wrong.
I needed, and the shame was overwhelming.
I failed, and so I hated being young.”

Those four lines, each a declarative sentence ending in a period, are the exception in this collection. In many poems where Mr. Galassi describes the crisis that ended his marriage and led him to a more authentic life he employs long columns of short enjambed lines often ending in the middle of a word divided with a hyphen. In “The Room on Naxos” he tells his wife how on a vacation in Greece their marriage might have ended earlier than it did:

“when I tried to tell
you it had been won-
derful but it was
over you didn’t hear
me didn’t understand
what I was saying and
I kept on going so as
not to hurt you and
then fell in love a-
gain: Where would we
be now if you had
heard me if our is-
land time had been a
sun-dazed moment not
the prelude to a long
long story rife with
declarations and ad-
missions one or the
other of us didn’t
hear?”

In “Reconstructed Poem” he tells her:

“You too are silent and your look
is elsewhere, no return, no spark.
Ahead of us a cigarette
falls in the dark,

“breaks into little flakes of fire,
heightens the native-sense of sin.
I am as far from my desire
as I have ever been.”

In “Rootwork,” still addressing his wife, he compares that desire to weeds that are impossible to unroot:

“And Roundup won’t
eradicate the sim-
plest allium in
the terrace crev-
ice, either. Eter-
nal return…and
your root world
and mine? Sister,
don’t even bother.”

“Clearing the Path” ends with “Ours,” a three and a half page list poem in the form of an unpunctuated run-on sentence that catalogs his and his wife’s shared memories and possessions that ends:

“You twisted your-
self into a pretzel
trying to tolerate
something you hated
in me it turned out
was essential. Does
that mean I should
twist myself into a
pretzel trying not
to be the thing that
made you twist
yourself into a
pretzel? . . . ”

“Seventh Avenue,” a three and a quarter page walk in the city poem reminiscent of the late James Schuyler’s “Dining Out with Doug and Frank,” describes walking the length of Seventh Avenue from Central Park West down to Greenwich Village and the people different buildings and other landmarks call to mind.

The poems in I Can Sleep Later describe another breakup, this time with Jude, who is replaced by another beloved, Tom. In “Tom in Rome” Mr. Galassi compares Tom to a statue of Antinous, the Roman emperor Hadrian’s lover, mentioning other famous sculptures, three kinds of marble and two kinds of limestone. The book’s last three poems are dedicated to people identified only by their initials.

Left-Handed: Poems is strongly recommended to all poetry lovers and to all readers who find they must radically change their lives in order to live more authentically.